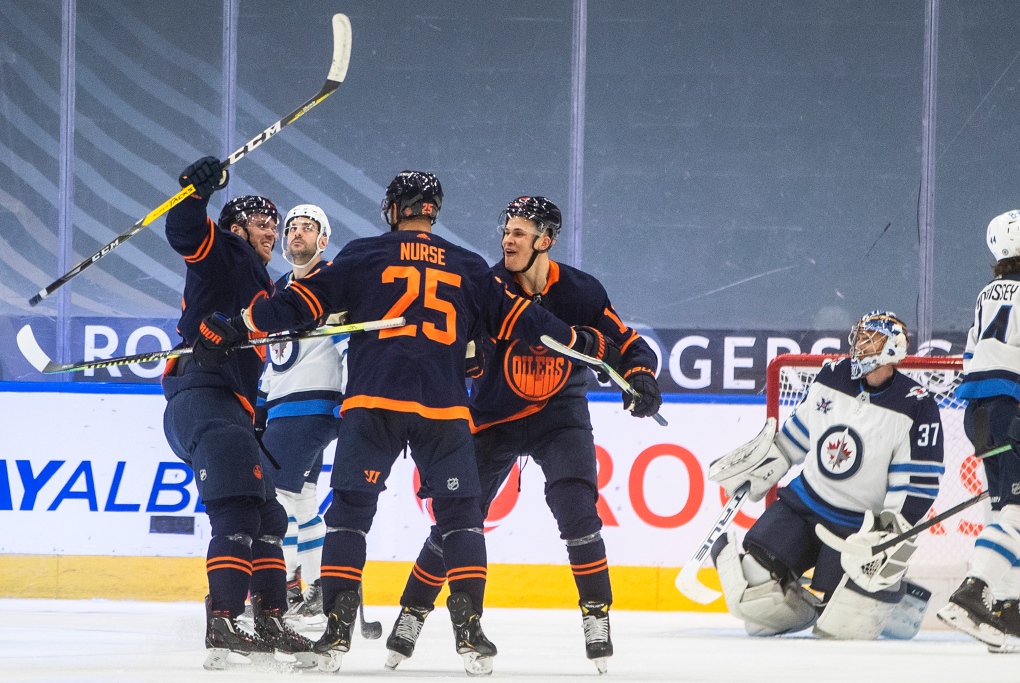 EDMONTON -- The Edmonton Oilers' resiliency has helped put them atop the North Division standings.

Leon Draisaitl scored the game-winning goal in the third period as the Edmonton Oilers came back from a 2-0 deficit to defeat the Winnipeg Jets 4-2 Saturday night at Rogers Place in Edmonton.

"I think that we're resilient. We figured out different ways to stick around and win hockey games. It's obviously a big part of making the playoffs. I think we've done a great job of that this year. Obviously we have to keep that going," Draisaitl said.

Connor McDavid scored a goal and an assist, while Darnell Nurse and Devin Shore also scored for Edmonton. Mike Smith made 29 saves (21-13-0). The Oilers have now won three straight and are currently tied with the Toronto Maple Leafs atop the North Division.

Andrew Copp and Pierre-Luc Dubois scored for Winnipeg (18-11-2) while Connor Hellebuyck made 33 saves in the losing effort.

"We don't like it. The locker room is not thrilled right now, so that's a good sign," Jets forward Blake Wheeler said.

Copp scored the first goal of the game on a power play at 10:36 of the first period. Nikolaj Ehlers fired a puck that pinballed off an Oilers defenceman and Copp's stick before finding the back of the net.

Dubois doubled the Jets' lead with 4:33 left to play in the opening period. But McDavid responded almost two minutes later, cutting the Jets' lead in half.

Neither side scored in the second period as both goaltenders kept the shooters at bay. Smith even made a highlight reel save after nearly costing his team a goal.

Smith made an errant pass from behind his own goal that was intercepted by Jets forward Kyle Connor, who had an open cage to shoot at, but Smith caught the puck in mid-air with his glove.

"I've said it all along, (Smith) is one of the best athletes I've ever coached. You see it on display there tonight. I just mentioned it. He makes timely saves. I've seen him play like this for a long time. He's in a groove. He's playing very well and he's a big part of our team," Oilers coach Dave Tippett said.

Nurse tied the game in the third period with his 10th goal of the season, beating Hellebuyck with a shot that nestled into the right-hand corner of the net. The defenceman matched his career-high for goals in a season with his game-tying marker.

"Darnell's a guy that works harder than anyone I've ever seen at his game, off the ice, on the ice, video. You name it, he does it," McDavid said.

Draisaitl capped off the comeback with a goal after coming up ice on a 2-on-1 with McDavid. The latter fed Draisaitl a pass that he slapped past Hellebuyck to take the lead.

Shore's empty-net goal with 1:20 left to play in the game gave the Oilers all the breathing room they needed to secure the victory.

Edmonton returns to action Monday to play the first of three consecutive games against the Montreal Canadiens. Winnipeg will also play Monday, squaring off against the Vancouver Canucks.

NOTES: Connor McDavid extended his points streak to nine games tonight. He has seven goals and 20 points in that span.

This report by The Canadian Press was first published March 20, 2021.