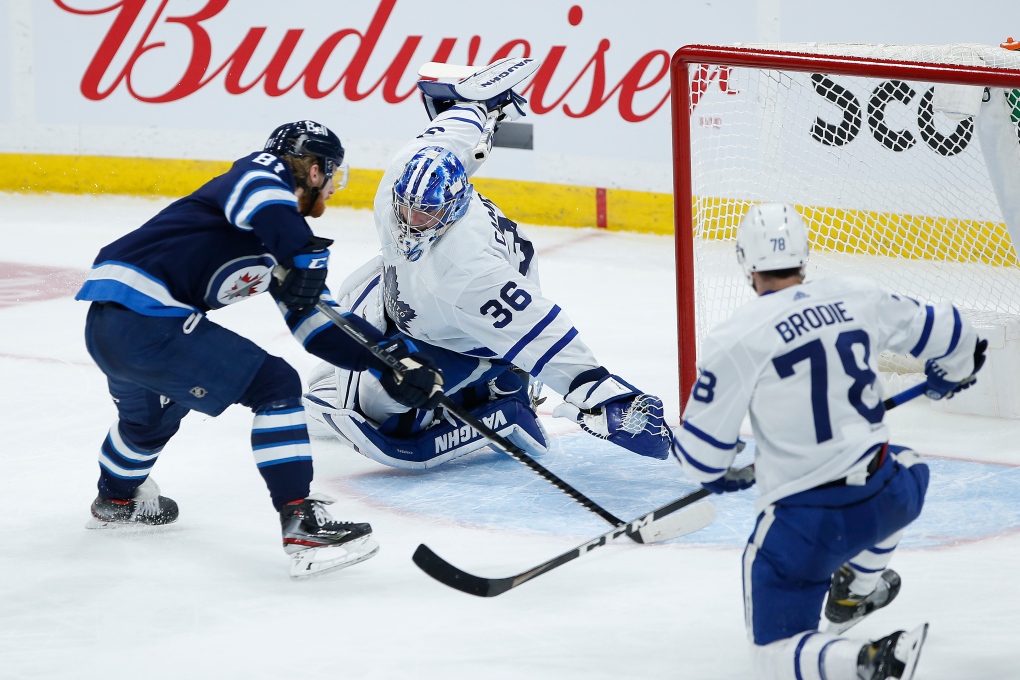 WINNIPEG -- The Winnipeg Jets' top line is clicking at the right time.

Kyle Connor scored twice including the eventual winner, while captain Blake Wheeler and Mark Scheifele each had two assists as Winnipeg beat the Toronto Maple Leafs 4-2 on Friday in the regular-season finale for both teams.

"I feel good going into the playoffs, playing with Mark and Kyle obviously a lot to be excited about," said Wheeler.

"I think we're playing at the same speed, I think we're kind of all on the same page. Sometimes when things aren't going good the tendency is to try as hard as you can and sometimes you try too hard. I think we are in a good rhythm right now... You give Kyle looks around the net and you'll score goals."

Mason Appleton and Jansen Harkins with an empty netter also scored for the Jets (30-23-3), while Connor Hellebuyck made 34 saves.

Toronto gave forward Mitch Marner the night off, with Adam Brooks taking his spot on a line with Auston Matthews and Alex Galchenyuk.

The game meant little as both teams already have their first-round playoff matches set.

The Jets start their first-round series with the Oilers on Wednesday in Edmonton, while the Leafs welcome the Montreal Canadiens for Game 1 of their series Thursday -- the first post-season meeting between the Original Six rivals since 1979.

"Looking forward to it, kind of a sense of excitement in that room," said Jets coach Paul Maurice. "You win a game, feel good, and you get to play fun games now."

Winnipeg had an early scare when forward Paul Stastny was hit into the end boards by Toronto defenceman Justin Holl on the game's first shift. He went to the dressing room before returning later in the period. He stuck around for the second and had 7:47 of ice time but didn't return for the third.

Forward Pierre-Luc Dubois also didn't finish the game with an undisclosed issue, but him and Stastny are expected to be ready for playoffs.

"Both are gonna be fine, precautionary to say the least. We just didn't want it to get worse," said Maurice, adding he believes they'll practice and be in the lineup for Game 1 against Edmonton.

Engvall beat Dubois in a race to the puck, and from inside the left face-off circle snapped home his seventh of the season through Hellebuyck at 7:15 of the first to open the scoring.

Campbell kept it 1-0 Toronto when he stacked the pads to rob Trevor Lewis, who was set up in front of the net on a cross-ice pass from Harkins in transition.

Appleton tied the game early in the second with his 12th of the year after linemate Adam Lowry forced Morgan Rielly to turn the puck over in front of his own net.

After Lowry got a stick on Rielly's breakout-pass attempt up the middle, Dominic Toninato picked up the loose puck and fed Appleton, who beat Campbell over the glove from in close 1:13 into the period.

Mikheyev restored the lead for Toronto at 5:25 when he came off the sideboards and put in a rebound off a Jake Muzzin point shot that Hellebuyck kicked right to the Leafs forward for his seventh of the season.

Winnipeg's second goal came after another Rielly error, when he was caught pinching and Scheifele and Connor broke out on a 2-on-1.

Scheifele crossed Toronto's blue line and fed Connor, who faked a shot and went forehand to backhand to beat a sliding Campbell for his 25th of the season at 13:52.

"It's always good for confidence, everyone loves to score," said Connor.

Hellebuyck made two big stops late in the second, first on captain John Tavares on a Leafs power play and then another on a streaking Mikheyev with just over a minute to go as Toronto took a 21-20 edge in shots into the third.

Connor gave Winnipeg its first lead with his second of the night, one-timing a pass from Wheeler glove side on Campbell 4:21 into the third.

"It's been a really interesting year for a lot of reasons," said Wheeler. "I think the overriding feeling after tonight is just excitement. Excited to compete in the playoffs. That's what you play for."