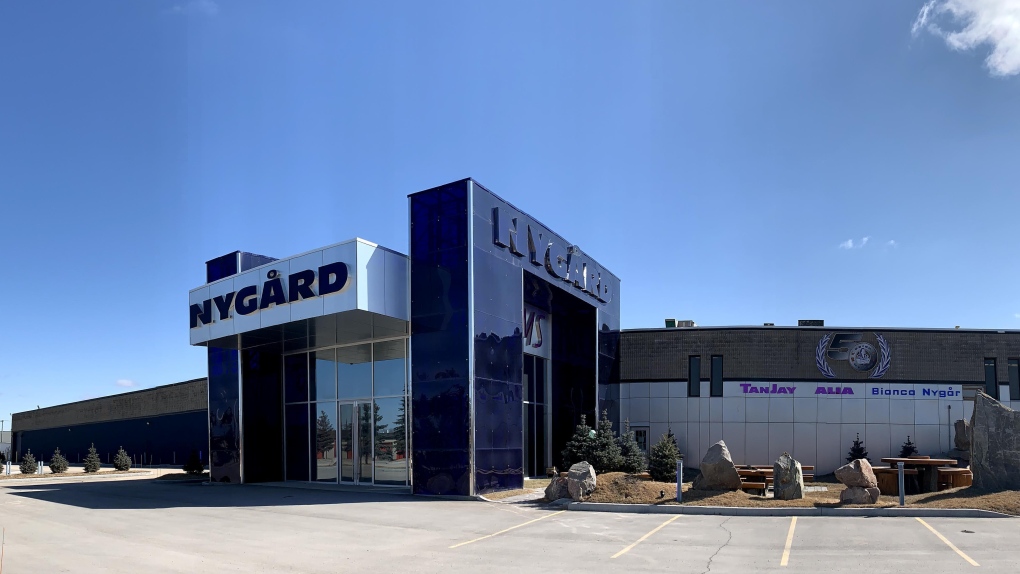 Ritcher Advisory Group is in the process of selling a former Nygard warehouse in Winnipeg at 1771 Inkster Blvd. (pictured) which houses millions of files from the Nygard company, according to court documents. (Source: Colliers International)

WINNIPEG -- Millions of documents once belonging to the former Winnipeg fashion mogul Peter Nygard are sitting in a Nygard warehouse that is in the process of being sold, and now lawyers are wondering what to do with them.

"It is not a simple matter to address 344 terabytes of data, 40 million files – these are not simple matters," Bruce Taylor, the lawyer representing the court-appointed receiver Ritcher Advisory Group, told the court on Wednesday.

Ritcher took control of nine Nygard companies in March after they went into receivership. Since then Ritcher has been liquidating the Nygard company – including the warehouse in Winnipeg at 1771 Inkster Blvd.

The warehouse currently houses millions of files from the Nygard company, including 213 servers and 5,100 boxes, according to a motion filed in the Court of Queen's Bench in September.

The motion requests the court to grant an order that, among other things, allows the respondents to preserve documents related to any litigation involving Peter Nygard or any Nygard employees.

The motion says moving the documents may prove difficult as the servers are "antiquated" and simply unplugging and dismantling them is risky.

With Ritcher looking to sell off the warehouse, the receiver wants to make sure a decision is reached on the fate of the files – some of which may be used by third parties regarding subpoenas issued by the U.S. attorney's office.

The other issue is that not all the documents and files may be useful. Taylor said probably half of the files on the servers are patterns used during the production of Nygard products, which he said have no relevance.

Still, Wayne Onchulenko, the lawyer representing Nygard, said they would like to take a look at the documents and decide for themselves.

"Our position on this at this stage is we don't know what we don't know," he said, adding they want to make sure the files are not destroyed or abandoned.

"I think we are all on one page, in that we don't want to have any of these documents destroyed, that documents that are relevant to this litigation and others are preserved."

Court of Queen's Bench Justice James Edmond said on Wednesday that the real issue is what will happen to the servers and documents once the Inkster warehouse is sold – a move that requires court approval. He said third parties may want to have some measures in place to preserve the documents.

A further hearing regarding the sale of the Inkster warehouse is coming up on Nov. 9, 2020.

No decision has been reached regarding the documents. Edmond granted a request from Onchulenko to take one week to speak with professionals and get some advice.

The hearing regarding the documents will resume in court on Oct. 21, 2020.

Nygard was facing a civil lawsuit that accused him of rape, sexual assault, and sex trafficking. More than 50 women across Canada, the U.S., the U.K., and the Bahamas had joined the class-action lawsuit in New York, which has been stayed until further notice.

The allegations against Nygard have not been proven in court, and no criminal charges have been filed against him.