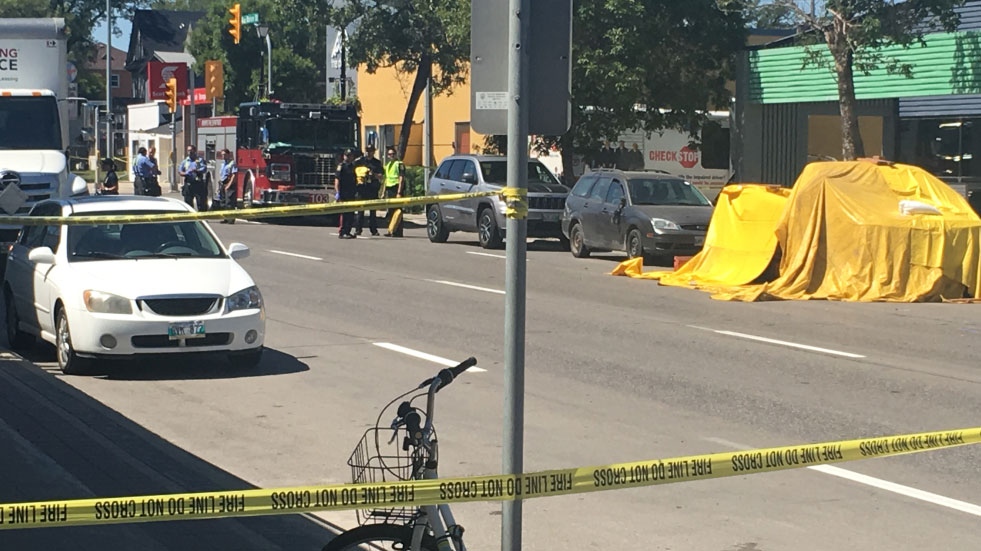 A woman in her 60s was pronounced dead at the scene and the vehicle, which police allege was a stolen truck towing a trailer, left without stopping. (Source: Gabrielle Marchand/CTV News)

WINNIPEG -- A Winnipeg family now has closure after the man who pleaded guilty to a “horrific” hit-and-run that killed a 61-year-old woman was sentenced to 10 years in prison, along with a lifetime driving ban.

On Wednesday, through tears, the family of 61-year-old Marlene Eusanio sat through the sentencing hearing for Gater Albert Browne, 40.

In September, Gater pleaded guilty to criminal negligence causing death and leaving the scene involving death. The charges come after a fatal 2017 hit-and-run that killed Marlene.

Justice James Edmond read the facts of the case, which he called “horrific.”

On Aug. 3, 2017, Browne was driving a rented vehicle towing a stolen trailer down Marion Street. Edmond said Browne swerved, nearly colliding with another vehicle, before hitting a row of parked cars.

“Mr. Browne did not break or even try to stop,” Edmond said.

The truck Browne was driving then hit Marlene so hard she was thrown into the rear of a vehicle. She was then dragged along the side of the truck, before she fell to the ground, was run over and killed.

“Mr. Browne fled the scene without stopping and failed to provide any assistance to Mrs. Eusanio at all,” said Edmond. “Instead the victim’s husband, Mr. Jean Louis Eusanio, who witnessed the crash and was in a state of severe shock, had to deal with the aftermath of the incident – the death of the love of his life.”

The court heard Browne then took the truck and washed it.

In the minutes leading up to the sentencing hearing, Jean Louis Eusanio sat cross-legged on the court room floor petting and kissing an emotional support dog as he waited for Browne to be brought in.

“I would hold you in my arms if I could,” he said to the black lab, who responded simply by wagging its tail.

The court was told Jean Louis has been diagnosed with PTSD since the crash. He suffers from nightmares and has difficulty walking along busy streets.

“The emotional pain suffered by Mrs. Eusanio’s children and grandchildren is severe and was described by one of her sons as feeling so utterly broken,” Edmond said.

In six impact statements submitted by family and friends, Marlene was described as loving, unselfish, full of life, and resilient beyond words.

BROWNE’S HISTORY OF VIOLENCE AND CRIME GROWING UP

At the time of the fatal crash, the court was told Browne was facing a number of driving restrictions including a lifetime ban from driving in British Columbia, and spent significant time in custody for driving, theft and assault.

But the court heard Browne’s entanglement with the justice system started from a young age.

At three he was abused by a family member. He moved onto the streets at 16, where he sold drugs, stole vehicles, and was a member of a gang – though Browne said he is no longer a member.

Brown was sentenced to 34 months in prison in 2006 for various charges of assault, dangerous driving, and attempted theft.

At the time of the sentencing, the court said Browne told the judge “There won’t be a next time.”

He was sentenced again in 2011 for various charges including theft of a vehicle, dangerous driving, and leaving the scene of an accident.

The court said Browne suffers from PTSD and depression.

“In my view, there is no disputing Mr. Browne has had a very difficult and troubling childhood and life.”

Edmond said Browne has taken responsibility for his actions by entering a guilty plea, and earlier in the court hearing apologized to the family.

“He appeared to be genuinely remorseful and made what I consider to be a sincere apology to the family,” Edmond said. “While I’m sure that seems hollow to the family, it never the less is a sign he recognizes the tremendous harm he has caused as a result of his reckless actions.”

SENTENCE LESS THAN WHAT CROWN ASKED

Along with the 10-year sentence, Browne is facing a lifetime ban from driving and owning weapons.

Browne is currently in custody in Saskatchewan serving a five year sentence minus 996 days for unrelated charges. The court said Browne will serve his most recent sentence of 10 years immediately after.