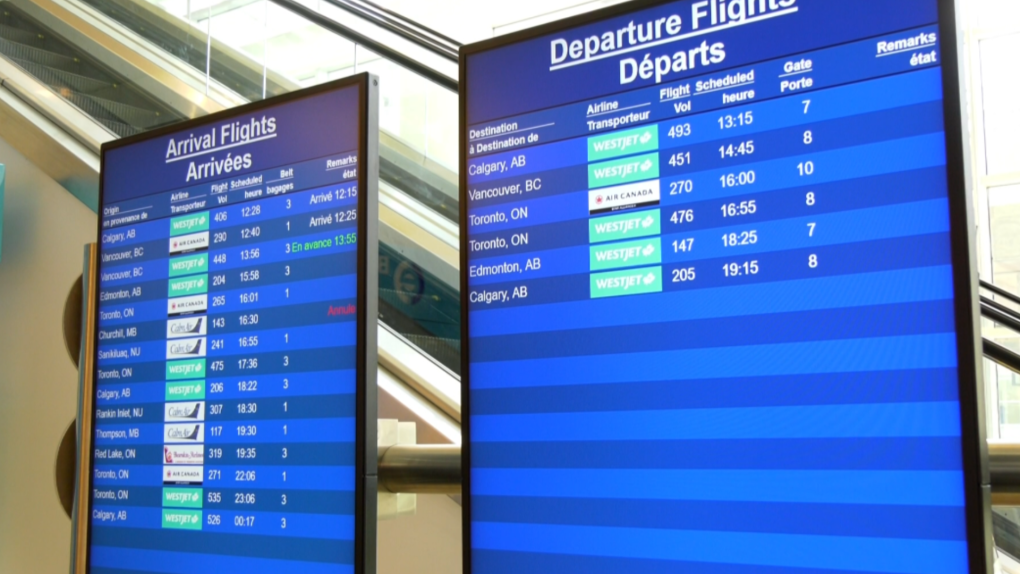 WINNIPEG -- The COVID-19 pandemic has placed a significant financial strain on Winnipeg’s airport, and it may take years to recover.

According to Barry Rempel, president and CEO of the Winnipeg Airports Authority (WAA), the airport ended 2019 in a good position in terms of its finances, but “March 2020 changed everything.”

“Manitoba began to activate its own pandemic plan, which immediately then kicked in our own emergency services plan, which were the safety precautions. In fact, we were sending all our staff home that could,” he said.

Rempel added March “really was a month like no other,” due to the number of flight cancellations and the border restrictions that were put in place.

“The atmosphere radically changed,” he said.

Rempel said at this point, the WAA looked at its operations and how it could reduce costs. The corporation ended up closing parts of its terminal building, shutting down various components that were high on energy consumption, and cancelling all external contracts.

Rempel said the airport went from about $70 million in capital to under $7 million, which includes things for safety and ongoing requirements for the operations of the airport.

Ultimately, the WAA was able to find about a 25 per cent reduction in its costs.

“We are going back through, and finding every possible way we can to balance and maintain our community’s connection with the outside,” Rempel said.

“We have to balance that, obviously, within the availability of our cash and the current revenue environment.”

The challenge for the Winnipeg airport is that just over 85 per cent of its costs are fixed costs.

“Our revenue model is based on a user-pay system, meaning obviously that our revenues are directly linked to how many people travel,” Rempel said.

“Ninety-five per cent fewer people travelling, 85 per cent fixed costs, that is not a good formula.

Rempel added he never thought he’d see a day when only 56 people used the airport, but that was a reality the WAA faced in July. With the province’s Phase 3 reopening plan though, people are now able to travel to and from Western Canada without a mandatory 14-day self-isolation, which has helped to boost the airport’s numbers.

He said all of this combined has forced the WAA to revise its 2020 forecast.

The corporation was initially budgeting for a slight increase in 2020, with a revenue number of about $142 million.

Rempel said the airport’s earnings before interest, taxes, depreciation, and amortization (EBITDA) will see a dramatic decrease from what was initially planned, resulting in a net loss of about $45 million.

“The issue we’re seeing globally coming into September is the business traffic is just not coming back,” Rempel said.

He said there are two things happening in September: the booking window has become tight, and more people are continuing to work from home, which means some of the business travel is not happening.

“The result though is a $32-million gap between what are requirements are - and this is just necessary capital expenditures - and interest and principal payments,” Rempel said.

He noted it will take time for the airlines to add routes back in, and that the WAA can’t recover from the impacts of the pandemic entirely on its own.

The WAA is forecasting that with the current climate, it will take more than five years for the organization to get back to its 2019 levels.

“The Government of Canada continues to encourage people to stay home, while refusing to support the very sector that’s most impacted by the decisions they’ve made,” Rempel said.

“Countries around the world are opening up what we call ‘safe travel corridors,’ based on the best medical evidence available and of their understanding of the virus – yet our government has not moved.”

The WAA is advocating that Canada ease its border restrictions, not with countries where the COVID-19 case count is higher, but to places with similar or lower case counts.

“We should not be restricting travel,” Rempel said.

“We need to be opening the borders and allowing commerce to happen.”

HOW THE WINNIPEG AIRPORT IS KEEPING PEOPLE SAFE

Rempel said the WAA is looking for ways to instill people’s confidence in travel again.

This includes a system on the main escalator, which ensures that every cycle of the escalator the handrail is sanitized.

“(It’s) a good way of ensuring people know that when they’re using that they can safely hold on,” he said.

Rempel added some of the other measures the airport has implemented are mandatory masks, signage, and hand sanitizer.

“Our protocols and initiatives are all based on the advice of healthcare professionals, public health authorities for our community.”