Culverts washed away before fatal train derailment near Ponton: TSB 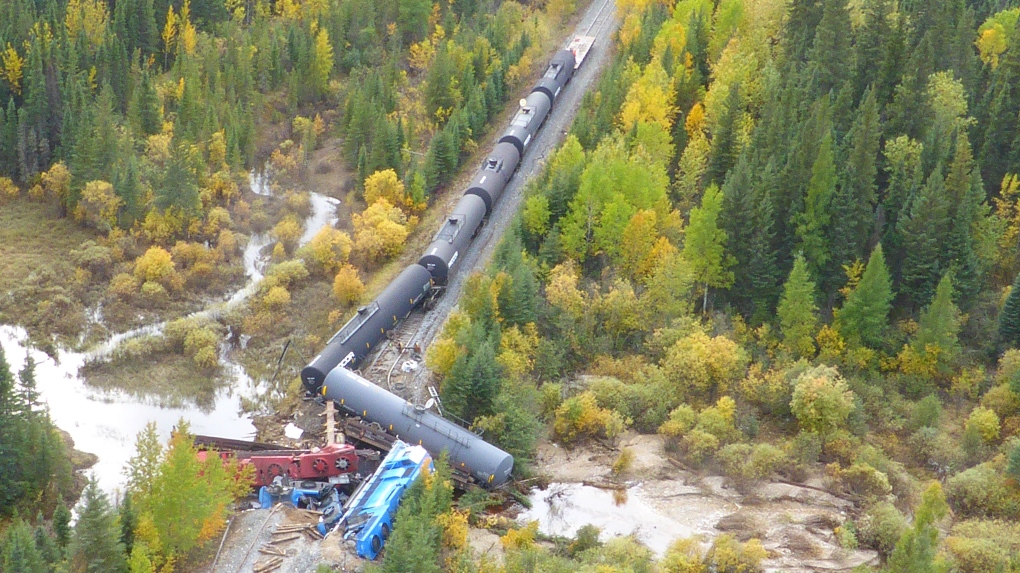 Images of the train derailment near Ponton, Man. (Source: Transportation Safety Board of Canada)

An investigator with the Transportation Safety Board of Canada says two culverts washed away along the Hudson Bay Railway before a train derailed near Ponton, Man. on Saturday.

One man died and another man was seriously injured. The crew members, both from The Pas, became trapped in the front locomotive after the derailment.

Jerry Berriault was at the site of the train derailment Monday and Tuesday.

He said the train was travelling northbound at about 25 miles per hour when it struck a washout.

“The lead locomotive struck the bank and three locomotives and four cars derailed. Two of those cars were carrying propane, none of which breached a leak,” said Berriault in a phone interview with CTV News Wednesday.

“The stop was immediate, sudden and catastrophic,” he said.

“There is significant damage to the locomotives and it appears at this time there was a washout from the east side to the west side of the track. There was a buildup of a significant volume of water."

Berriault said there is high water in the area due to precipitation over the spring and summer and it appears there was a release of water but what caused it has not been confirmed.

“The volume of water washed out the tracks,” he said.

Berriault said the location was inspected Wednesday and Thursday last week and although water was present the culverts were working.

He said the site of the washout is not monitored electronically by a system called 'centralized traffic control', which indicates continuity in the line and does exist on this railway.

He said the system is common on lines that are not remote. Other than a physical inspection, there is no way to detect a washout at the site, he said.

He said the washout occurred between Thursday night and Saturday afternoon.

No bridge at location: TSB

He said there is no bridge at the location and people not familiar with rail infrastructure could have mistaken timbers in the water.

“There are two, four by five foot boxwood culverts and they are right beside each other which allow the water to flow ... those boxwood culverts would have released, so when washout occurred, there were timbers downstream ... I can see how someone made the mistake but there was no bridge there”.

Berriault said the investigation is ongoing and is requesting information from the owners of Hudson Bay Railway.

Arctic Gateway Group which owns Hudson Bay Railway said it declined to comment at this time.