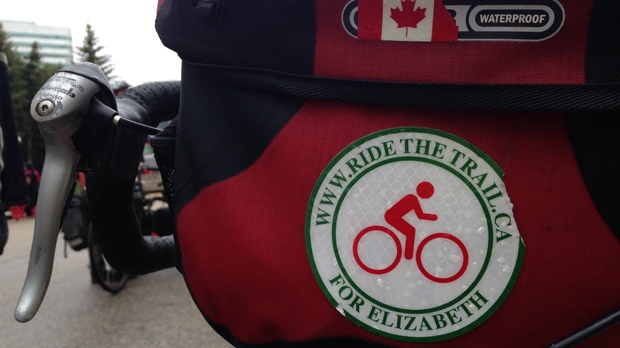 Edmund Aunger is riding the Trans-Canada rail after losing his wife in an accident on that same path. He arrived in Winnipeg on Sunday, Aug. 31, 2014.

An Alberta man is on a 12,500 km journey across Canada to raise awareness and remember a life lost.

Edmund Aunger is riding the Trans-Canada rail after losing his wife in an accident on that same path.

He stopped in Winnipeg on Sunday.

Aunger and his wife shared a decade of memories, seeing Canada and Europe from two wheels.

Elizabeth Sovis picked up the hobby late in life as a way to spend more time with her husband, but in July of 2012, tragedy struck. Sovis was killed on Prince Edward Island, minutes from the Trans-Canada Trail, a pathway she passionately felt needed attention.

"She was killed because of the problems with that trail, the very things that she wanted to work with," said Aunger.

He has taken his wife’s cause. Aunger rode from Edmonton to Winnipeg on the Trans-Canada Trail. The second leg, in a five-year journey, that will take him from Victoria, B.C. to Charlottetown, P.E.I. This summer, he's joined by a friend and his nephew.

"They've had a huge influence on my life, on all of my life," said Ron Jeffery, Aunger’s nephew.

The riders say they face many challenges on this leg of their tour, including unmaintained trails, pathways closed, and having to ride on the side of busy highways."

"It is a real mixed bag,” said Jeffery. “It is completely unpredictable."

Jeffery and Aunger describe difficult conditions, impossible to navigate for even experienced cyclists, they say. Aunger says the trail, started 22 years ago, needs an overhaul, and he's determined to get the government's attention to honour his late wife.

“She wanted to see the Trans-Canada Trail finished, so that it was safe and accessible for ordinary Canadians,” he said.

Aunger says the Trans-Canada Trail should be a safe path to ride and walk that's not shared with a dangerous roadway.

He will finish his cross-Canada ride in Charlottetown on July 17, 2017, exactly five years after his wife was killed.

- With a report by Meghan Roberts