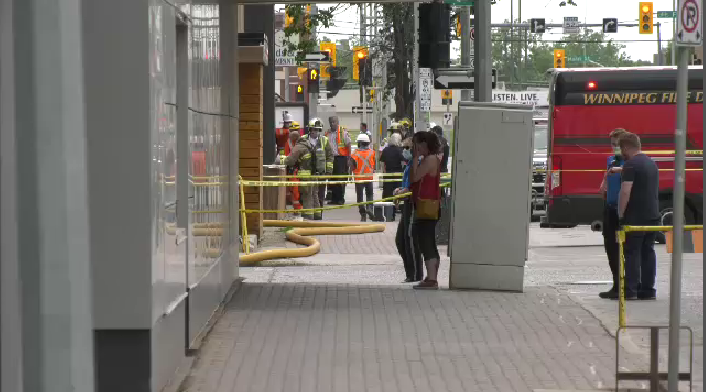 WINNIPEG -- Multiple buildings in downtown Winnipeg were evacuated Wednesday morning due to a damaged gas line.

Manitoba Hydro tweeted that a high-pressure gas line was damaged near 185 Smith Street, and a building across the street was evacuated.

Hydro said the gas leak was reported shortly after 10:30 a.m.

WFPS District Chief Terry Kelly said construction crews were working on the building when they drilled into a six-inch gas line.

“We checked the buildings to make sure that no gas got into buildings, evacuated buildings that had the smell of gas, shut down the ventilation systems for all these buildings, and proceeded to assist Hydro until they could get the gas leak shut off,” said WFPS District Chief Terry Kelly.

The gas was shut off by Hydro to allow crews to repair the damage safely. This resulted in about 30 customers temporarily losing their gas service.

Multiple buildings were evacuated despite Hydro being able to turn off the supply to the gas line quickly.

Displaced downtown residents could be seen in the area, some holding pets and still dressed in pajamas.

“They told us there was a gas leak in the opposite apartment and we need to get out,” said one resident.

Another resident, who wasn’t home at the time of the leak, told CTV News he was blocked from returning and had no idea when they were going to allow him access to his apartment.

Kelly said the roaring gas wasn’t a threat outside, but the surrounding buildings were drawing it in and that becomes a source where it can collect and find an ignition, potentially resulting in a fire or explosion.

“We don’t want no vehicles, sources of ignition anywhere near (the scene). We don’t want anyone in these buildings in case this blows,” said Kelly.

Repair times are unknown, according to Hydro, and are dependent on the damage done to the pipe that crews are currently excavating.

People are being asked to avoid the area.