‘Dancing Gabe’ among Manitobans to be honoured with volunteer award 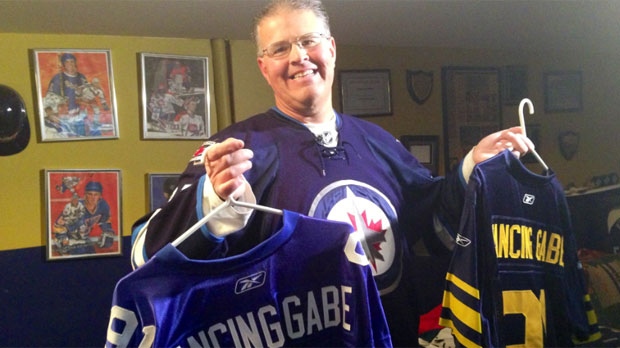 Dancing Gabe shows off some of his jerseys at his family's St. Vital home in Winnipeg.

WINNIPEG -- He's a staple in the crowds at home games in Winnipeg, and now, a Winnipeg man is being honoured for his volunteer work in the city.

Gabriel Langlois, also known as "Dancing Gabe," is one of 10 Manitobans who will be receiving the Sovereign's Medal for Volunteers from Manitoba's Lt.-Gov. Janice Filmon on Monday.

The medal is part of the Canadian Honours System and recognizes people for their volunteer work in their communities.

Langlois, who has been seen in crowds at sporting events since the 1980s, has been volunteering daily at the St. Vital YMCA-YWCA for over 30 years, according to a news release from the province. The release states he helps with setting up and taking down the kids' corner at the facility.

The other Manitobans receiving the medal include:

The 10 individuals will be honoured at Government House on Monday at 5 p.m.