WINNIPEG -- A dog is on a long road to recovery after being found by RCMP officers in a remote Manitoba community with a jar stuck on its head and six bullet wounds from a pellet gun.

The rescue happened on Thursday when RCMP officers were called to a home in the Fort Alexander community after a woman found the dog, a two-year-old spaniel-cross named Greta, under her deck with the jar stuck on its head frozen to the ground.

RCMP said the woman did not know who the dog belonged to and was worried for its well-being.

Manitoba Underdogs Rescue, who is caring for the dog, told CTV News the officer was able to remove the jar, but found Greta’s body was covered in cuts and bites believed to be caused by other dogs.

Greta was taken to an emergency veterinary clinic in Winnipeg where it was discovered she was suffering from metal toxicity. An x-ray showed she had been shot six times with a pellet gun and had a large piece of a metal in her stomach. 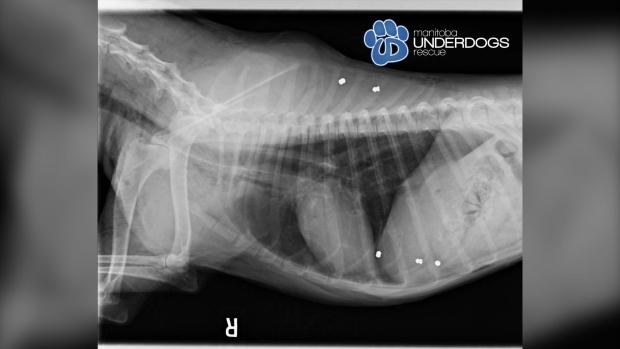 An x-ray showed Greta, a dog rescued from a remote Manitoban community, had been shot six times with a pellet gun and had a large piece of a metal in her stomach. (Source: Facebook/ Manitoba Underdogs Rescue Inc.)

“They found that she was so hungry she had eaten part of an aluminum can,” said Lindsay Gillanders, the media coordinator for the Manitoba Underdogs Rescue.

Gillanders said it’s difficult to say how these injuries were caused and what the motivations behind them were.

“I mean she’s been shot, so a human absolutely did that. I think at the very least, it’s an extreme case of animal neglect,” Gillanders said. “I find it hard to think of a dog that's starving with a jar stuck on her head who’s been shot and bitten by other dogs and not intervene.”

Gillanders said at this point there are a lot of unknowns for Greta and the rescue is still in the fact-finding stage. What they do know is the treatment and care for the dog is going to cost several thousands of dollars.

The rescue is asking for donations to help cover the cost.

“In wintertime we try to keep a nice reserve of funds aside, knowing that it's going to get to -40C and there is going to be some really sad cases that come our way of frozen dogs, cold dogs, starving dogs,” Gillanders said. 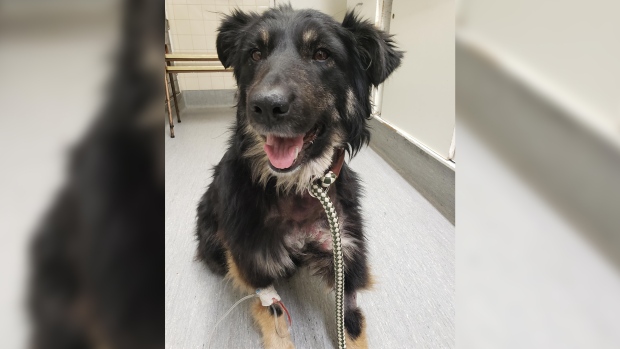 Greta the dog is on a long road to recovery after being found by an RCMP officer in a remote Manitoba community with a jar stuck on its head and six bullet wounds from a pellet gun.(Submitted: Manitoba Underdogs Rescue Inc.)

Greta’s case is not completely unique. With many rescue dogs coming from remote communities, Gillanders said people in Manitoba can and should be doing better.

“The sad reality is that we get probably three to four of these really, really tragic cases every year,” she said, adding it’s not necessarily the fault of any one community. “We've got cases of dogs being surrendered that were loved by their humans that just can't care for them anymore. There are great people in remote communities and in northern communities, but the reality is that the stray population is just out of control in some cases.”

Gillanders said the issue for many remote communities is access to veterinary services. She said it’s a systematic problem that requires the government to step up take action.