Dog takes golf cart for a ride in Manitoba, crashes into truck

A Manitoba canine with a love of golf cart rides – but questionable driving skills – took a short journey he won’t soon forget, and neither will his owners.

“We were away and then we came back and I said to my husband, ‘Oh my god! Someone was in our yard and took our golf cart for a joy ride and smashed it into my truck’,” said dog owner Mallory Kmet, who lives near Gimli.

Titan was already having a hard day. Banned from the deck and his comfy cushion after playing with a skunk, Titan had sought shelter when it started raining.

“The next place for him to go was the golf cart because it has a roof and he likes to sit on something comfy,” said owner Mallory Kmet.

Kmet said the golf cart is used to move firewood, and Titan is a big fan of golf cart rides. The last time the cart was used it was not properly shut off.

“He got on it but he’s too big. So he’s moving around and he sat on the gas pedal and it took off and hit my truck,” Kmet said. “The golf cart was pushed into the truck pretty good so he hit it pretty good.” 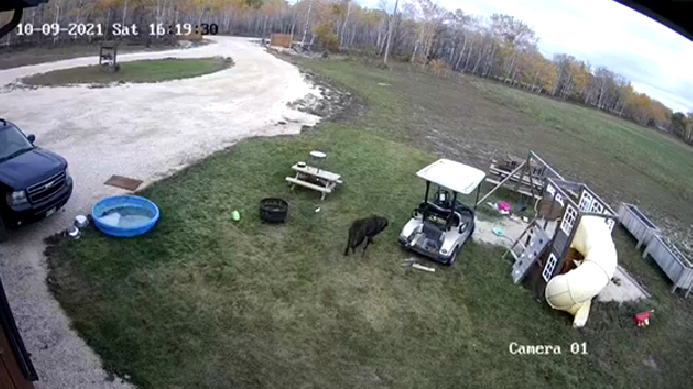 The video shows Titan sauntering towards the cart before slowly making himself comfortable on the cart’s seat.

All of a sudden it takes off, pulling a U-turn before accelerating into the truck. After the collision Titan appears to shake off the ordeal and carries on with his day.

Titan was okay and walked away injury-free from the ordeal. The truck suffered minor damage which Kmet’s husband was able to fix.

Kmet said the golf cart will now always be turned off correctly to stop any future joy rides, something Titan may or may not be happy with.

“He still wants to go for golf cart rides so you’ll still catch him sitting in the golf cart cause that’s one of his favourite things to do,” Kmet said.