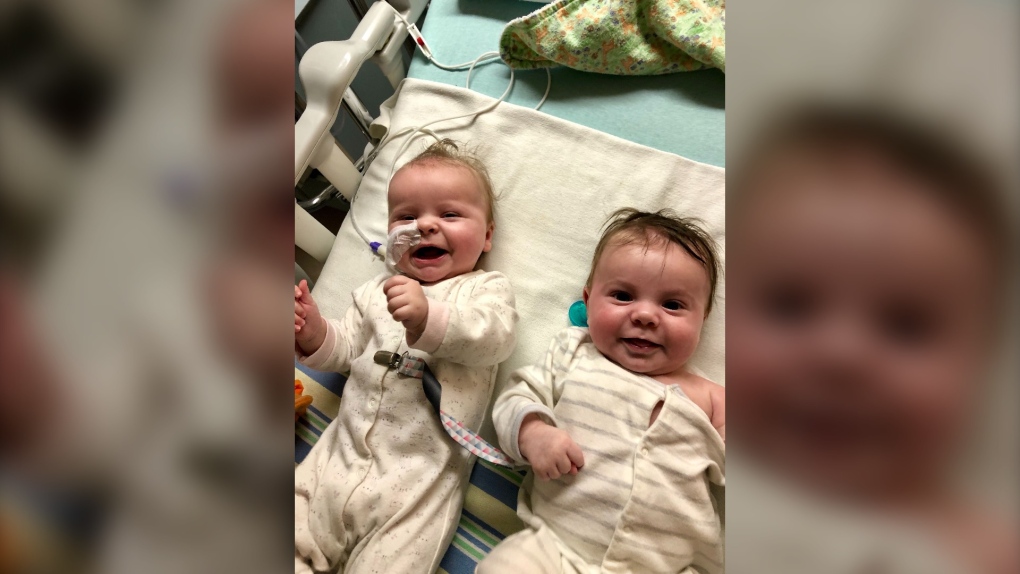 WINNIPEG -- A Winnipeg mother of three is telling other parents that it’s ok to ask others to keep their distance from kids during cold and flu season.

“It was terrifying, it really was,” she said. “It started out as a runny nose and then within a couple days it was a cough and then after that, you could kind of see their chest go up and down.”

At the time the twins were three months old, now a year later she tells CTV News, both still have breathing issues from having RSV. Her daughter has a chronic wheeze in her left lung.

“We started treating her as asthmatic basically and before this flu season, we were pre-treating her. So we were giving her puffers daily.”

Last month Johnson was in the emergency room with her son who was having breathing problems. It was then she posted to social media about her family's experience with RSV.

“Mom, dad, grandma, grandpa, aunt uncle, brother, sisters, and strangers, DO NOT kiss a baby when you are sick,” reads the post.

Johnson told CTV News after her twins were out of the hospital, she had signs made to put on the twin's car seats that said ‘don’t kiss my baby.’

“Your germs are your germs,” she said, “Keep them there.”

Dr. Aaron Chiu, a medical director of RSV and a neonatologist at HSC Women’s Hospital, said when it comes to RSV this year, it is causing a more severe infection.

“For the past two years we’ve had a really mild RSV season, this year it’s come in and it’s come in in full force,” he said.

He said in the first week of 2020, 90 patients have been positively tested for RSV. Last year that number was 30. If you compare this entire cold and flu season so far to last, he explained to CTV News, more people have also been admitted into hospital.

Dr. Chiu said everyone is at risk for getting RSV, but the younger someone is the higher the risk is for complications.

“The difference is where you and I have RSV it just feels like a cold, but the way it affects children, especially young children, that’s why they become quite sick with it.”

He said RSV causes breathing tubes to thicken as well as a lot of mucus.

“For you and I, we can cough it up and it wouldn’t be a problem but when you have a small child, especially one who already have some lung problems, that thickening, that secretion makes it really difficult for them to breathe.”

This is why he says he always advises parents to be extra cautious this time of year with hand washing and having visitors over who are feeling a bit ill.

“And if there is contact, they want a kiss, kiss on the back of the head as opposed to anywhere up close,” he said.

He said every week more cases of RSV are being reported and have shown no signs of slowing down. Dr. Chiu added, if you are concerned about how you or your child are coping with an illness, get looked at by a healthcare provider.