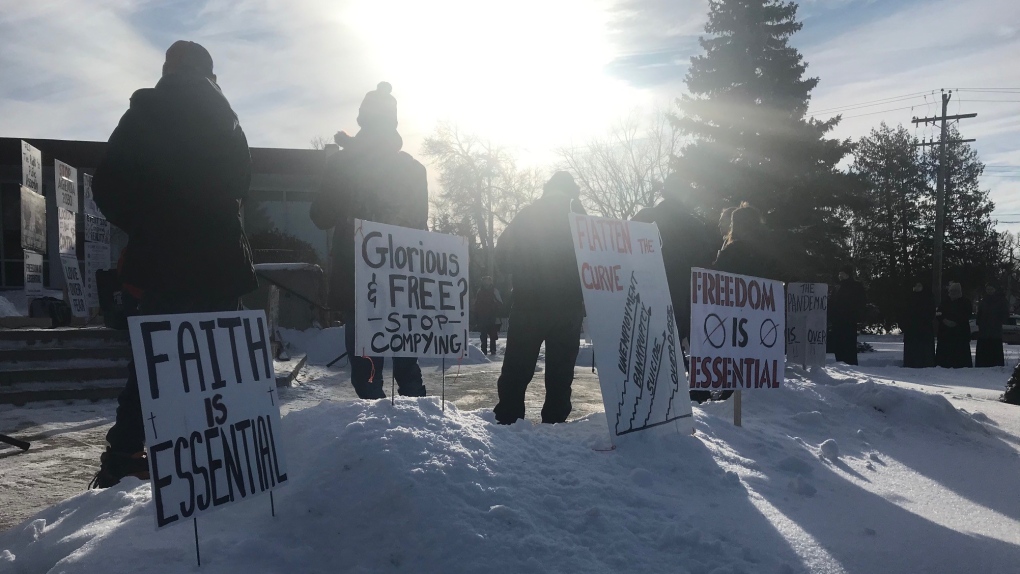 "We're here to mainly focus on solutions that are not part of the mainstream narrative," said Sharon, a representative for Hugs Over Masks and Freedom to All.

She noted the gathering is not a protest but an educational rally to inspire people.

"Hugs Over Masks is about connections to people, we welcome anyone and everyone with medical choice in the forefront."

The rally comes after Friday comments from Steinbach Mayor Earl Funk on why out of town organizers needed to return to the city following a previous rally in November 2020.

Mayor Funk was not the only one upset by the rally. Steinbach resident and essential worker Brad Penner, who didn't attend the rally, was not a fan. He believes the health orders were put in place to protect Manitobans and that people should abide by them.

"These people want to make a statement, so they're doing it where they're getting the biggest bang for their buck," Penner said. "It's Steinbach, and it's a rally, right away it's more noticeable."

Manitoba Together, a group involved in organizing the rally, said the protest is a stand against Premier Brian Pallister and the Manitoba government "for stripping away all of our freedoms as well all of the deaths and mental health abuses this Manitoba Government is inflicting upon its people."

Andrew Sawatzky said he attended the rally as a show of support. He is against all of the current restrictions, including mandatory masks, but believes there should be targeted protection for vulnerable people.

"I don't think that the measures, the restrictions being put on us are justified. I think they are doing more harm than good and they got to be lifted," said Sawatzky, "It's got to stop."

When asked why another Steinbach rally was planned despite the mayor's objections, Sharon said it was because the first one was well-received.

"Believe it or not, we were invited back, and the other thing is the universe told me that we made a difference in November and we're here again to share the difference that we did make," she said.

Penner, however, said the rally casts his city in a negative light.

"As Steinbachers, we want this to be over with, we're all frustrated with wearing a mask, and we want to get on life," he said. "If people are coming here, they're making us look bad. If they infect people, it just takes longer. I'm not a fan of it."