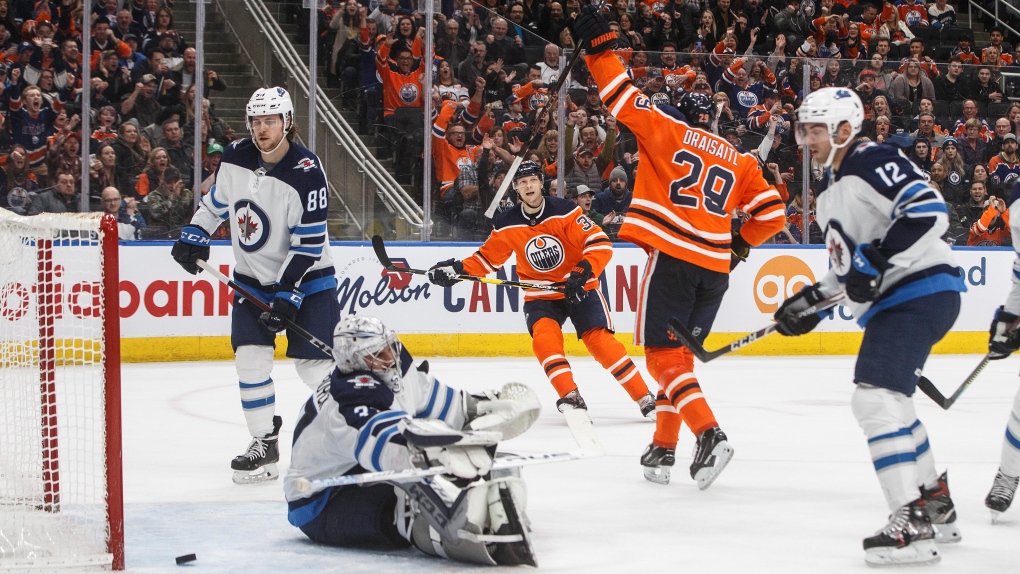 EDMONTON -- Leon Draisaitl had two goals and an assist as the Edmonton Oilers came away with a big 3-2 victory over the Winnipeg Jets on Saturday in a game between a pair of injury-riddled teams hungry for playoff points.

Ryan Nugent-Hopkins put away the winner with 5:16 remaining and assisted on both of Draisaitl's goals as the Oilers (34-23-8) snapped a two-game losing skid.

Connor McDavid sent a backhand pass through the crease to Draisaitl, who banked his 38th goal of the season off of Jets goalie Connor Hellebuyck and in at the 6:27 mark of the opening period.

It was Draisaitl's league-leading 100th point of the campaign, becoming the first German-born player and seventh player in Oilers franchise history to hit the century mark in consecutive seasons.

The Jets controlled the pace in the second period and were rewarded 13 minutes in when Shaw was sprung on a breakaway and beat Oilers goalie Mike Smith.

Just 44 seconds later, Blake Wheeler made a nice move to set up Connor for his 33rd goal of the season and 100th of his career.

Draisaitl deflected home a McDavid shot on a power play with 13 seconds left in the second period to tie it up 2-2.

The Oilers surged back in front with five minutes to play in the third as Draisaitl fed it to Nugent-Hopkins and he picked the corner or his 19th.

Winnipeg had intense pressure with their goalie pulled for the final couple minutes, but Smith was solid to preserve the win, ending up with 38 saves.

The Oilers embark on a three-game road trip in Nashville on Monday, while the Jets begin a three-game homestand on Tuesday against Buffalo.

This report by The Canadian Press was first published Feb. 29, 2020.