Dubois confident despite difficult first season with Jets: 'This is the real me' 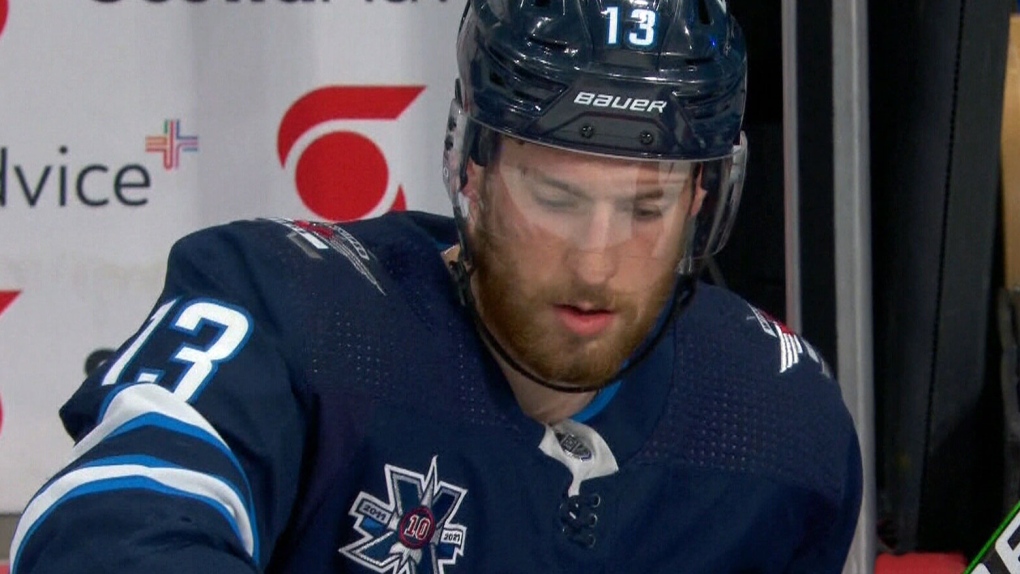 Forced to navigate multiple quarantines, a highly publicized run-in with his former coach, a blockbuster trade, injuries and loneliness -- the Winnipeg Jets centre was never comfortable during a roller-coaster 2020-21 campaign set against the COVID-19 pandemic's backdrop.

And Dubois knows full-well that long list will come off as one massive excuse to some. But it's his truth looking back on a trying season that drained him both physically and mentally.

"I didn't feel like myself," he explained. "I know it's not the real me.

Now rested and rejuvenated following a summer that resembled something more typical, the No. 3 pick at the 2016 NHL draft is convinced this season will be different.

"Finally the mask's off," Dubois added at last week's NHL/NHLPA media tour. "I'm back to my normal self."

But the road was a bumpy one.

After a standout performance for the Columbus Blue Jackets inside the NHL's post-season bubble two summers ago, Dubois had trouble training and finding ice time back home in Montreal because of coronavirus restrictions.

He wasn't in his usual physical shape upon returning to Ohio last fall to continue preparations for the shortened schedule before quarantining when a COVID-19 outbreak swept through the Blue Jackets' locker room.

Having already requested a trade out of Columbus, things then came to a head once the season started during a January game when he was stapled to the bench for more than two periods by John Tortorella, who felt the player wasn't putting in the appropriate work rate.

Dubois was subsequently dealt to Winnipeg for Patrick Laine and Jack Rosolvic two days later in a swap that also saw the Jets receive a 2022 third-round pick.

But instead of immediately hitting the ice and getting to know his new teammates, what was waiting for him once he crossed the border was another two-week quarantine -- this one mandated by the Canadian government -- at a Winnipeg hotel.

And even when those 14 days of solitude were over, Dubois wasn't able to really get to know the Jets because of COVID-19 restrictions.

There were no dinners with the guys, no shows or shopping trips on the road, no bonding over beers, no roars from the home crowd.

"It's funny," Dubois said. "All these questions (at the NHL/NHLPA media event) are like, 'Which teammate does this? Which does that?'

"Honestly, I have no idea."

And he's convinced that lack of understanding translated to the ice.

"It's hard when you don't know the person," the 24-year-old continued. "How do you communicate with the guy? How do you tell them you want the puck here? It was tough. I tried to get to know them at the rink as much as possible, but everybody has a life of their own.

Carrying a salary cap hit of US$5 million this season and eligible to become a restricted free agent in July, Dubois would eventually finish a season also impacted by injury with eight goals and 20 points in 41 games for the Jets after scoring once in five contests with Columbus.

The six-foot-two, 205-pound forward added three assists in seven playoff games as Winnipeg swept the Edmonton Oilers before getting ousted in four straight by the Montreal Canadiens.

"You're obviously disappointed because you never know when you can win a Stanley Cup," Dubois said. "A week later, I felt, 'OK, I can finally reset."'

"It's hard to reset in the middle of a season."

But the man who had a career-high 27 goals, 34 assists and 61 points in 2018-19, and was a dominant force in the pandemic bubble for Columbus -- especially against the Toronto Maple Leafs in the qualifying round -- believes he's now there.

"I feel like the normal Pierre-Luc Dubois and not the guy that's preoccupied about getting back into shape, preoccupied about fitting in," said the native of Ste-Agathe-des-Monts, Que. "A lot of those things that I never experienced in my life, everything happened at the same time.

"To say I'm excited would be an understatement."

And that bodes well for the Jets and head coach Paul Maurice, who was impressed when told of Dubois' willingness to accept responsibility for what happened last season, with the team set to open training camp Wednesday.

"That takes a lot of courage for a young guy," he said. "It's such a rarity that we find people that want to take ownership of things that didn't go well."

Maurice is also encouraged by a player still far from the finished product entering his fifth NHL campaign.

"I've got lots of faith in this young man," said Maurice, who's poised to begin his 24th season as an NHL head coach, and ninth with Winnipeg. "In our exit meeting (in June), I knew exactly how he felt about his year. He had a very strong understanding. Lots of people can talk, but the big one for me is when our strength coach comes back and says, 'Oh, my God, does he look great.'

Dubois has 74 goals and 179 points in 280 NHL contests to go along with eight goals and 14 assists in 33 playoff outings, including that 10-game, 10-point performance inside the 2020 summer bubble.

After enduring his toughest season to date -- and hopefully ever -- Dubois once again feels like that player.

"The real Pierre-Luc Dubois is back."

This report by The Canadian Press was first published Sept. 21, 2021.