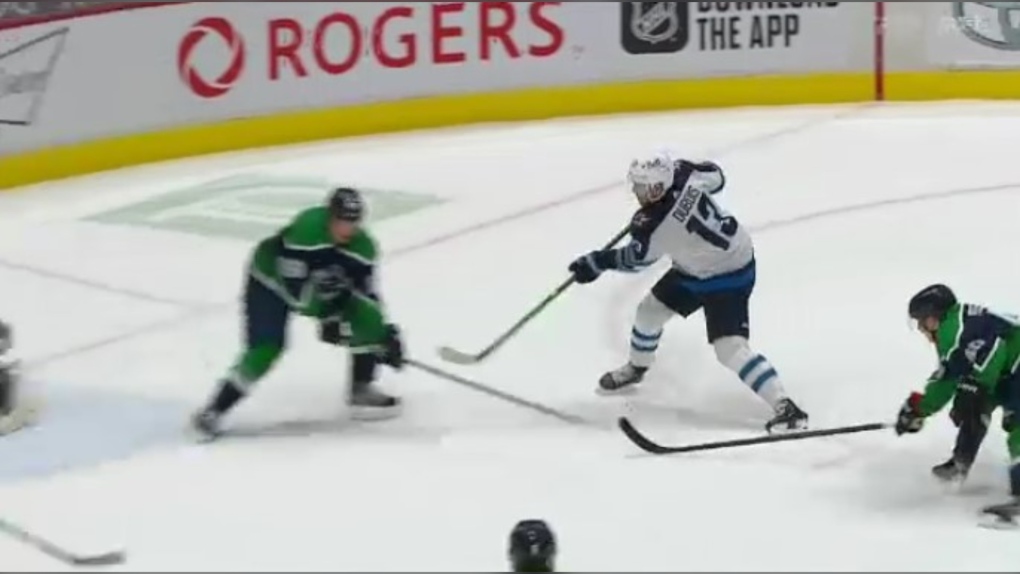 VANCOUVER -- Pierre-Luc Dubois was quick to make an impact in his return to the Winnipeg Jets lineup.

After missing four games with a muscle injury, the 22-year-old forward returned with a vengeance Sunday, tallying two goals -- including the overtime winner -- and an assist as the Jets topped the Vancouver Canucks 4-3.

Still, Dubois feels he has more to give.

"My game is still not where I know it can be. I know I can improve on a lot of things -- timing, execution, reads, stuff like that," he said. "But it felt good to be out there."

Dubois' first goal put Winnipeg (11-6-1) on the board midway through the second period.

Blake Wheeler found his line mate at the bottom of the slot and fed him a slick pass from the goal line. Dubois beat Vancouver netminder Braden Holtby with a quick snap shot to collect his first goal in a Jets jersey.

He added a helper on Neal Pionk's third-period power-play dagger, and captured the win with his second goal of the night 27 seconds into overtime.

Sunday was Dubois' third game for Winnipeg. He started the season by publicly expressing his desire for a trade and the Columbus Blue Jackets responded, dealing the former third-overall pick to the Jets for forwards Patrik Laine and Jack Roslovic on Jan. 23.

Finally getting on the scoreboard for his new team felt good, Dubois said.

"My first game, it was one of those games where you kind of want to forget about it. You just get your legs back in it, your hands back in it. Second game, I felt a bit better and then that injury where I missed some time," he said.

"So tonight to finally get out there and play and then get that nice pass from (Wheeler) and just score, it kind of felt like a weight off my shoulders and then the rest of the game to keep applying that pressure and keep getting better."

Winnipeg coach Paul Maurice said he wouldn't have assessed Dubois differently if he'd had a quiet game on Sunday.

"He had an awfully big game, so we're pretty pleased with it," he said. "I'm more happy for him. It's great that the Jets win, but he's a young man that's been through an awful lot. He's done everything right here. His shift length, his work ethic, all things."

Quarantine and the muscle ailment have limited how much time Dubois has spent on the ice with his new line mates, Wheeler and Mark Scheifele, but he's quickly picking up on their tendencies.

The trio combined for seven points on Sunday, including a goal and an assist for Scheifele and a pair of helpers from Wheeler.

"They're two really smart players with the puck, without the puck, positionally and on the forecheck," Dubois said. "There's not much that both of them can't do on the ice. So you see the chemistry they have and try to read off them, try to be in the right spot."

Sunday's result was a frustrating one for the Canucks (8-12-2), who held a 2-0 lead coming out of the first period.

Brandon Sutter opened the scoring 3:38 into the game, and Elias Pettersson added two more goals, including a power-play blast that forced overtime with 38 seconds on the clock.

But it was the Swedish centre's first-period strike that appeared to leave Jets goalie Connor Hellebuyck shaking his head.

Pettersson had his back to the net when he put a stunning no-look shot through his legs and into the top-left corner.

Coming back late in the third was big for Vancouver, Pettersson said, but there are still some plays the team would redo if they had the chance.

"We have to be more crisp with the puck. I was trying to make some plays, I was losing too many puck battles," he said. "I mean, we have the game in our hands but we kind of let it go."

Hellebuyck had 31 saves on Sunday and Holtby stopped 27 shots for Vancouver.

Sunday's result gave Winnipeg the sweep of a two-game series between the two sides. The Jets also downed the Canucks 2-0 on Friday.

"We sucked a point out, but we've got to start beating these teams," Sutter said.

"It's all division games this year. We've just got to get a bit of a streak going. And that's the beauty of it, too. You're playing teams that, if you do beat them, you're gaining points on them every night. So hopefully we've been through the rough patch of the year and we just got to keep pushing and get through it."

The Canucks will be back in action Tuesday when they host the Oilers. The Jets are headed back to Winnipeg where they'll entertain the Canadiens on Thursday.

This report by The Canadian Press was first published Feb. 21, 2021.