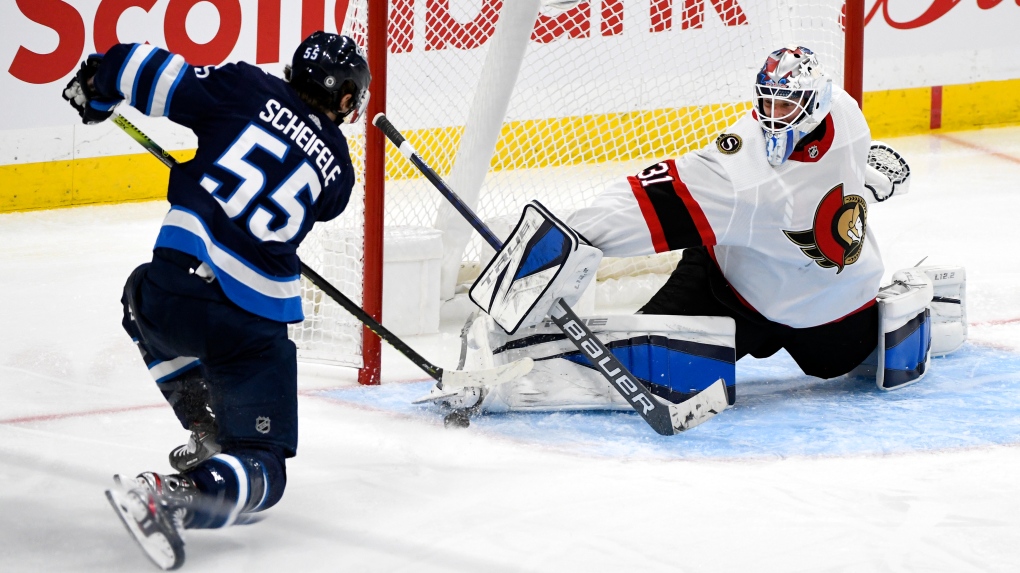 Adam Lowry and Kyle Connor also scored for the Jets (23-13-3), while Andrew Copp and Nikolaj Ehlers each notched a pair of assists.

The Senators (13-22-4) got a goal and an assist from Ryan Dzingel, and Josh Norris buried a power-play marker midway through the third period. Connor Brown made things interesting late, cutting Winnipeg's lead to a single goal with just over three minutes left on the clock.

Anton Forsberg tied a career-high with 46 shots against and had 42 stops for Ottawa (13-22-4). At the other end of the ice, Connor Hellebuyck had a slightly quieter night, putting up 20 saves.

Winnipeg continues to hold the edge in the 10-game season series between the two sides, with a 5-1-0 record.

The win gave the Jets sole possession of second spot in the North Division, at least temporarily. Winnipeg sits four points back of the No. 1 Toronto Maple Leafs.

Winnipeg held a 4-1 lead heading into the final frame Monday but Ottawa refused to go quietly into the night.

The Sens sliced the Jets' lead to one with 3:09 left on the game clock after Artem Annisimov dug a puck out along the boards. He dragged a pair of defenders with him as he powered to the net, then sent a slick behind-the-back pass to Brown in the slot.

Brown blasted a shot past Hellebuyck for his 10th goal of the season. He's now scored in four-straight games.

Ottawa bit into Winnipeg's lead earlier in the period with a power-play goal after Logan Stanley was called for holding.

Dzingel sent a cross-ice pass to Norris and the rookie defenceman ripped a shot from the face-off dot to cut the Jets' lead to 4-2.

Connor put a puck through Forsberg's legs 16:12 into the second, but the shot took a fortuitous bounce off the stick of Ottawa centre Chris Tierney at the bottom of the slot.

The tally put the Jets up 4-1 heading into the final frame, and counted as Connor's 18th of the season.

Midway through the second, Brady Tkachuk was called for slashing and the Jets took advantage.

Moments before the man advantage expired, Copp sliced a crisp pass to Dubois and he riffled a shot over a sprawled-out Forsberg for his second goal of the night and ninth of the season.

Both sides saw ample special teams action on Monday, with the Jets forced to kill off three penalties in the first period alone.

Ottawa was 1 for 4 on the power play and Winnipeg went 1 of 3. The Senators have power-play goals in their last three games.

Dzingel temporarily cut the Jets' lead to a single goal 4:48 into the middle frame. Winnipeg lost track of the puck behind the net and the Sens left-winger picked it up, popping it over Hellebuyck's pad to make it 2-1.

The goal was Dzingel's eighth of the year.

Just 29 seconds earlier, Lowry had scored for Winnipeg with a shot from the top of the faceoff circle. It was his eighth goal of the year.

Dubois opened the scoring 2:10 into the game. Blake Wheeler dished him a pass from below the goal line and Dubois flicked a quick shot into the top-left corner of the net.

The Senators will be back in action on Wednesday when they host the Oilers. The Jets will meet the Canadiens in Montreal on Thursday.

NOTES: Forsberg's previous record for saves faced came on Feb. 14, 2015 when he was playing for the Columbus. The N.Y. Islanders downed the Blue Jackets 6-3 that night.

This report by The Canadian Press was first published April 5, 2021.