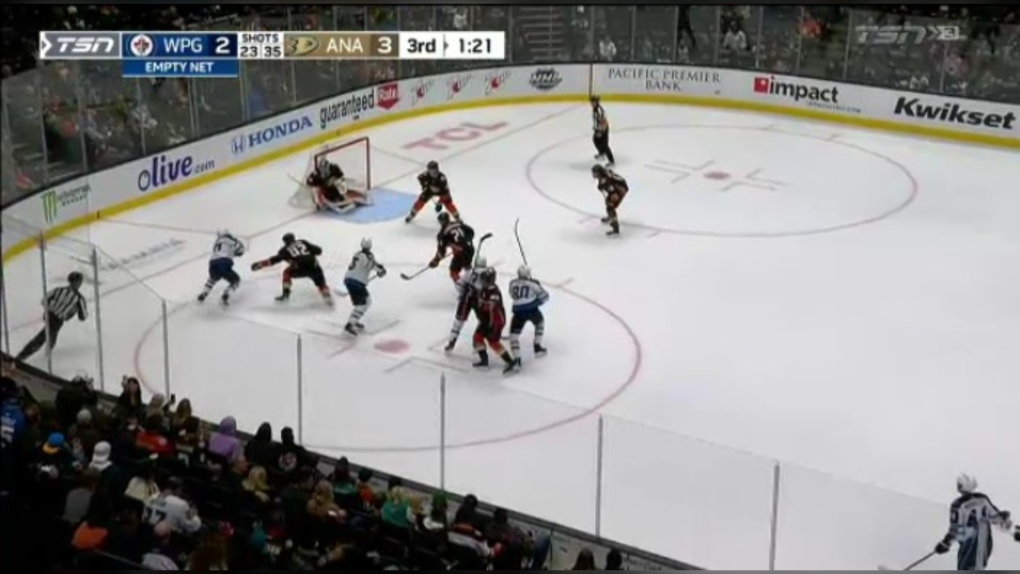 Nikolaj Ehlers scored twice 19 seconds apart in the third period as the Winnipeg Jets rallied for a 4-3 victory over the Anaheim Ducks on Tuesday night.

The Jets trailed 3-2 late in the third period and pulled the goalie before Ehlers tied it with 1:20 remaining after a scramble following a faceoff deep in the offensive zone. He then scored the winner with 1:01 with a shot from the right faceoff circle.

Ehlers is the sixth player in NHL history to score a game-tying and go-ahead goal in the final two minutes of regulation and the first since Chicago's Jonathan Toews did it in a 2015 game against Buffalo.

"If you're going to try to make sense of this in terms of karma, Nik Ehlers probably had enough stored up -- or bounces, or whatever it is -- for a good shooter to get a few breaks," coach Paul Maurice said.

It is the second time in franchise history the Jets have trailed in the final two minutes and won in regulation. The other was in 2004, as the Atlanta Thrashers, when they defeated Florida.

"I think I had a lot of good chances, a lot of shots (during his goalless streak) but I think tonight I just skated," said Ehlers, who also had an assist. "It feels amazing obviously to come back and win that game."

Andrew Copp had a goal and two assists. Evgeny Svechnikov also scored, and Connor Hellebuyck made 32 saves for the Jets, who have won three straight.

"That's the interesting thing about the sport is every puck that goes to the net is a chance, right? So, every once in a while, you'll get that unusual, you bang in two like that," Maurice said. "I've seen things like that before, I've seen them in the playoffs. Down a goal, you pull the goalie, score, go right down the ice and win a series, it happens."

Trevor Zegras and Sonny Milano had a goal and an assist, and Josh Manson also scored for Anaheim. John Gibson stopped 21 shots for the Ducks, who have dropped five of their last six.

"For 58 minutes, it was probably the best game we played. But the game's 60 minutes, so unacceptable," coach Dallas Eakins said.

Anaheim grabbed a 2-1 lead 1:39 into the third period when Manson ripped a wrist shot from near the blue line that deflected off Dubois' glove and into the net. Copp tied it less than four minutes later with a shot from the right faceoff circle off a pass from Stastny.

Zegras put Anaheim on top again with a snap shot after Milano stole the puck deep in the Winnipeg zone, but the Ducks were unable to sustain momentum.

"It's one of those ones that just kind of doesn't make sense right now. Up until the last two-minute mark, that was one of the better games we've had this season in terms of controlling the pace of the game," Zegras said. "These are games that we need to win, and I guess we're going to look at it and see what we can do better, but this definitely stings for sure."

Svechnikov opened the scoring at 2:07 of the second period when he took the feed in the slot from Pierre-Luc Dubois and beat Gibson with a wrist shot that Gibson was unable to stop with his stick or blocker. It is Svechnikov's first goal with the Jets after he signed as a restricted free agent during the offseason.

The Ducks tied it four minutes later when Trevor Zegras stole the puck from Nate Schmidt in the offensive zone and passed it to Milano, who fired a wrist shot past Hellebuyck for his first goal of the season.