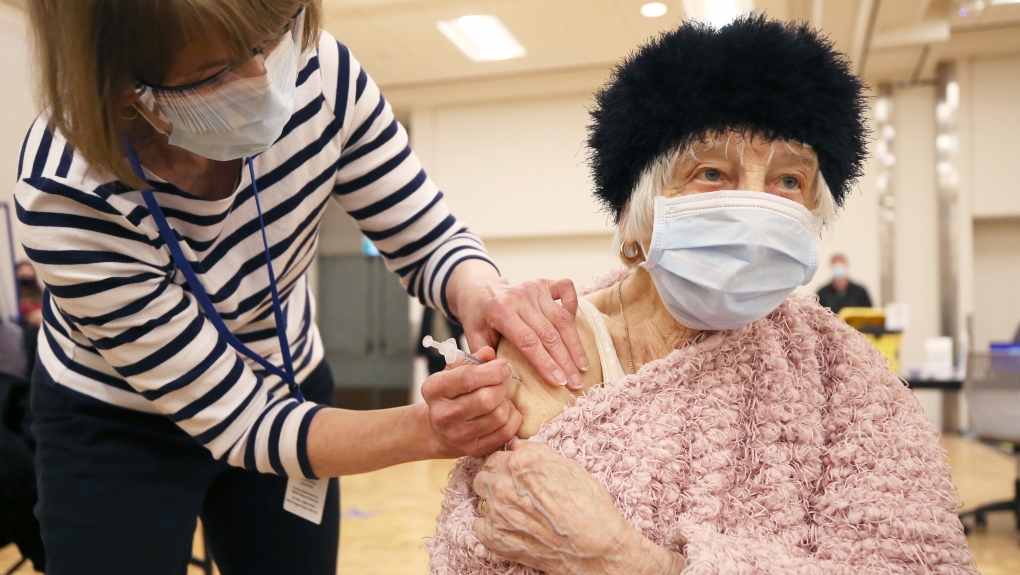 Nina Luhowy, 93, gets her shot at the COVID-19 vaccination super site in Winnipeg on Monday, March 1, 2021. THE CANADIAN PRESS/Kevin King - POOL

WINNIPEG -- The Manitoba government is making changes to its COVID-19 vaccination rollout plan in the wake of the decision to delay the second dose of the vaccine, which could mean more eligible Manitobans could receive a shot by spring.

During a briefing on Friday, Johanu Botha, the co-lead of Manitoba’s Vaccine Implementation Task Force, said the province is updating its vaccine timeline projections, saying people’s spot in the vaccine queue will arrive quicker.

“The same number of needles in arms will happen every single day, but because we don’t go through every person twice, your turn will arrive quicker,” Botha said.

The new projections for how long it will take to vaccinate everyone with one dose were released. The low-range supply scenario estimates all eligible Manitobans will be vaccinated by the end of June.

The new projection for a high supply of vaccines shows all eligible Manitobans will be vaccinated by mid-May.

These timelines reflect the first dose only, Botha said.

The National Advisory Committee on Immunization (NACI) announced this week that the time between first and second doses of all approved COVID-19 vaccines right now can be delayed for up to four months, while still being effective.

Starting today, Manitoba will not be making second-dose appointments at the same time as the first.

People will be notified when it’s time to make a second dose appointment. Bookings for more than one person at a time start today as well, which Botha said will allow for couples to book appointments together.

All current appointments for the second doses will be honoured.

Manitoba is getting 18,000 doses of the AstraZeneca vaccine next week. During the first week of April, Pfizer vaccine volumes are expected to double, but Botha said it’s still not what was expected for the second quarter of 2021.

Botha said it is too early to know when the Johnson & Johnson vaccine, which was approved Friday, could arrive in Manitoba.

The updated timeline can be found below.