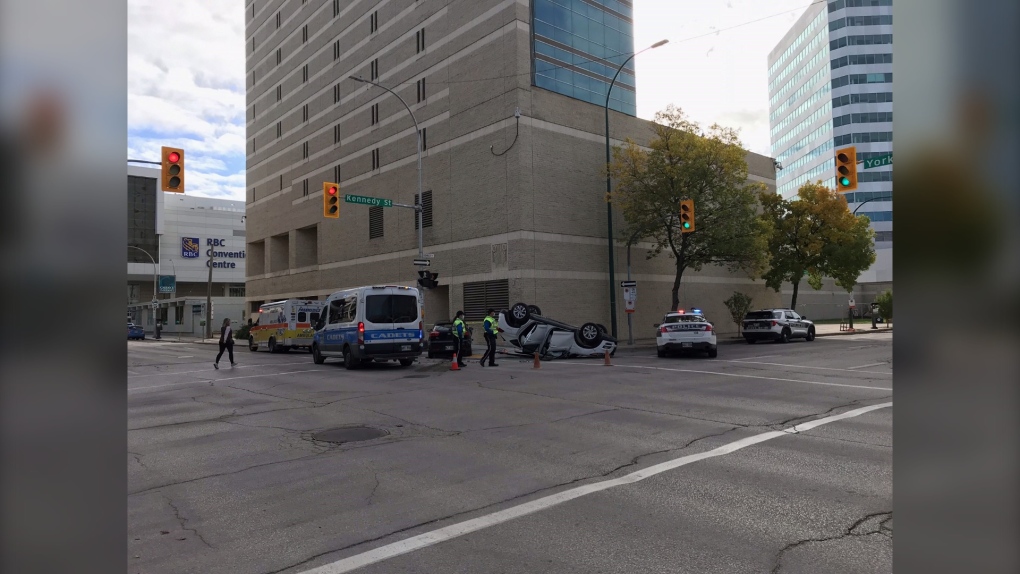 Emergency crews are responding to a two-vehicle crash in Downtown Winnipeg Friday morning.

Images from the scene show a car overturned at Kennedy Street and York Avenue.

Winnipeg police, firefighters and paramedics are at the scene.

A spokesperson for Winnipeg police said officers responded to a two-vehicle crash outside of the courthouse at 9:30 a.m., and there were no serious injuries.

The Canada Recovery Benefit (CRB) will expire as of Oct. 23, and will be replaced by a targeted benefit that helps individuals whose work is impacted by COVID-19 lockdowns.

Instead of issuing a singular federal national COVID-19 vaccine passport, the federal government says that each province and territory will be responsible for issuing a 'standardized pan-Canadian' vaccine passport that Canadians can use when travelling abroad. Each province's system is supposed to have a 'common' look and feel, with the expectation that by next month all Canadians will have access.

The federal government announced Thursday that Canada will receive 2.9 million doses of Pfizer’s pediatric COVID-19 vaccine shortly after its approval by Health Canada for the five to 11 age group.

Iqaluit is being forced to medevac patients out of the territory with the only hospital unable to sterilize equipment properly as the water contamination crisis continues.

The Vancouver Police Board is to hear a report Thursday recommending the force change its handcuffing policy after the arrest of an Indigenous man and his 12-year-old granddaughter at a bank in 2019.

Ontario is no longer providing the federal government with COVID-19 flight exposure data, citing an increase in public health measures and vaccinations.

Scientists in New Zealand have found that microplastics, which have been found in rivers, oceans, soil and animals, are also in the air we breathe and report that this airborne pollution is likely affecting climate change.