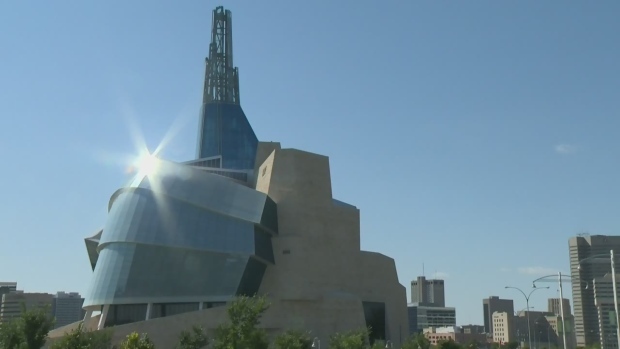 WINNIPEG -- An online account that brought to light allegations of a racist and discriminatory work environment at the Canadian Museum for Human Rights says the resignation of the museum's president is just a first step.

"This is a small win but we're not celebrating yet," the CMHR Stop Lying group posted on social media. "One down, many more to go. Keep fighting."

The Winnipeg museum's board of trustees announced Thursday that president and CEO John Young agreed to step down effective immediately.

"We will act quickly to improve museum processes and our policies, and to rebuild relationships and trust with our staff and those we have let down, especially the Black and Indigenous communities, people of colour and LGBTQ2+ communities," board chairwoman Pauline Rafferty said in a news release.

She said she will take over as interim CEO until a new leader is in place.

The CMHR Stop Lying group was formed earlier this month after the museum posted images of a Justice for Black Lives rally. Current and former employees quickly began responding that it was hypocritical because of racism they faced at work.

One person said she worked at the museum for four years and experienced the most racism she'd ever seen in her life.

Thiane Diop, one of the group's founders who is Black, posted earlier this week about reporting a staff member for making sexually inappropriate comments. She said nothing was done about it until white colleagues made a complaint.

"It is clear to me that there is a discrepancy around how these issues are handled," the post said. "From my own experience and observations, I can trace that back to race."

Another member said Indigenous staff were told they must remain neutral when speaking about displays on residential schools, the Indian Act, Metis rights and missing and murdered Indigenous women and girls.

Employees also said that they had to censor displays about LGBTQ history at the request of some school groups.

Leadership at the museum apologized last week for censoring displays and said it was contrary to everything the museum stands for. The practice was stopped in 2017.

The Public Service Alliance of Canada, the union that represents staff at the museum, has said that the issues getting attention now have been raised with management since 2018.

The museum's board said an external, third-party review of the museum is already underway and that will be followed by an institution-wide examination of all museum policies and practices.