Encampments located underneath or near Winnipeg bridges to be removed, city says 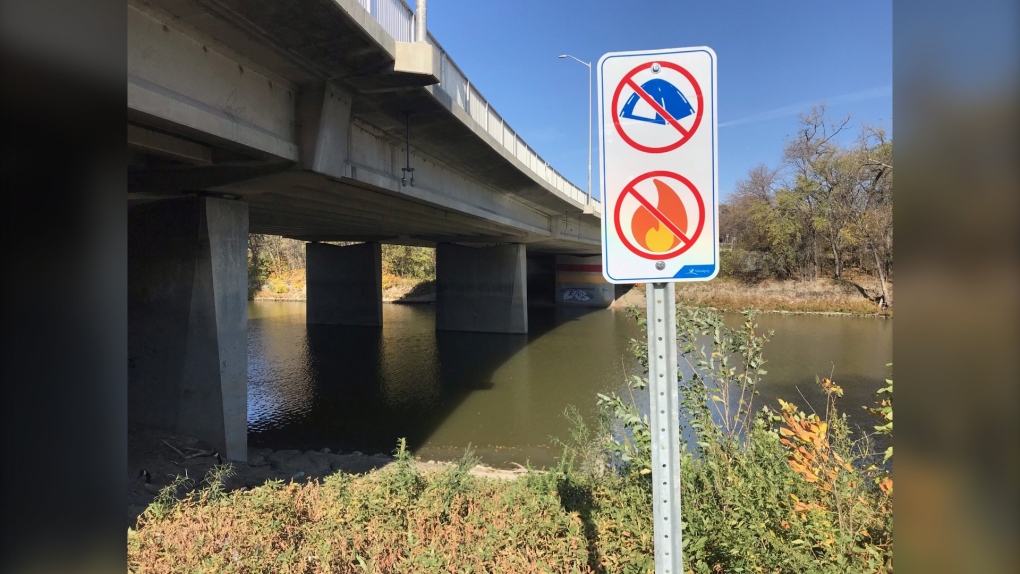 A no camping and no open fires sign located under the Osborne Street bridge is pictured on October 6, 2021. The City of Winnipeg has banned temporary encampments underneath or adjacent to bridges for safety reasons (CTV News Photo Josh Crabb)

The City of Winnipeg has banned temporary encampments underneath or adjacent to bridges over concerns for the safety of people using the spaces for shelter, a city spokesperson says.

According to the latest numbers from End Homelessness Winnipeg, there are about 105 encampments located throughout the city with anywhere from a few people to 20 people staying in each one.

As part of the process, the city has installed 26 signs in 13 different locations reminding people open fires and camping are not permitted.

The city said new rules which kicked in on Oct.1, 2021, prohibit camping or gathering under bridges.

“It has been identified that temporary encampments under bridges are posing significant life safety hazards,” David Driedger, a spokesperson for the city, said in an email. “The city will implement a practice of vacating all encampments located beneath bridges and/or immediately adjacent to bridges, and prohibiting re-occupation of the space.”

The city said it’s been working closely with community partners such as End Homelessness Winnipeg and Main Street Project to support unsheltered people living in Winnipeg.

Jason Whitford, executive director of End Homelessness Winnipeg, hopes any enforcement or evictions are carried out using a gentle approach.

“I’m hoping that it’s not going to be adversarial or punitive in any way, that different resources would accompany if enforcement is to occur and I’m sure that will take place because we have a lot of good caring people out there,” he said.

Driedger said through its network, the city will help to relocate unsheltered people and provide access to transitional housing.

“The city will continue to cover the initial cost of transitional housing for residents who choose this option,” Driedger said.

He said the encampments pose a safety risk to individuals because they’re constructed using combustible materials, covered with blankets or tarps with small entrances.

“These materials typically burn readily and vigorously. Encampment residents also utilize a variety of heat-producing devices to help protect them from the cold including propane heaters, open fires, and candles within and close to shelters making the risk of uncontrolled fire or carbon monoxide poisoning significant,” Driedger said.

“We have reached a point where it is no longer prudent to allow encampments under the bridges to continue.”