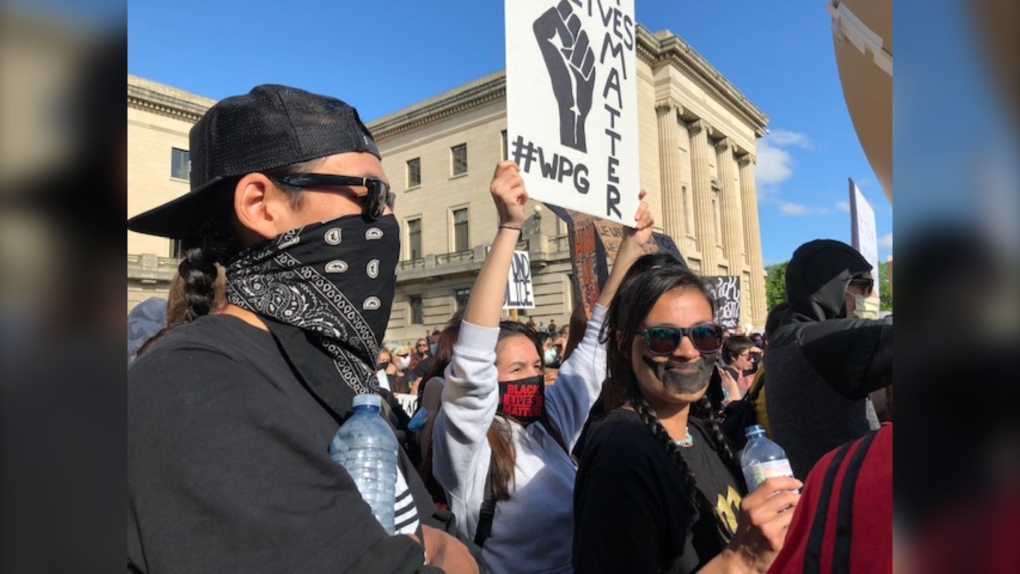 WINNIPEG -- Thousands gathered in Winnipeg for the Justice 4 Black Lives rally, demanding change and an end to racism in the wake of the killing of George Floyd.

Demonstrators at the rally chanted, “I can’t breathe” ̶̶ the same words used by George Floyd as former Minneapolis police officer Derek Chauvin pressed his knee into Floyd’s neck before he died.

An autopsy released by the Hennepin County Medical Examiner's Office revealed Floyd had a heart attack while being restrained by officers, and classified his death as a homicide.

Chauvin has since been charged with second-degree murder.

“Enough is enough,” Uzoma Asagwara, MLA for Union Station shouted while speaking at the rally. “Racism does not rest, and, as Black people, we understand that racism doesn’t rest. We don’t get to rest.”

'JUSTICE WAS NOT SERVED'

Sandy Deng, a community organizer from Winnipeg’s Sudanese community, said she is proud of Winnipeg for coming out to the rally, but said more needs to be done in the city.

She called for action in the death Machuar Madut, a Winnipeg man who was struggling with mental health issues, and was shot and killed by Winnipeg police in February.

The Independent Investigation Unit of Manitoba ruled the officer-involved would not face any charges. It said the use of force was justified and unavoidable and said the officer's decision to shoot the man was necessary to prevent death or injury to himself or the other officer.

“I don’t care what the report says, justice was not served,” Deng said.

A moment of silence was held for Madut at the rally.

The crowd also sang Happy Birthday to Breonna Taylor, a Black woman who was shot and killed in her apartment by police detectives in Louisville. Her birthday would have been on Friday.

People at the rally included members of Manitoba’s Black and Indigenous community, as well as those looking to be allies.

With thousands of people estimated to have been in attendance, organizers encouraged those who are privileged to listen and learn.

“Black people are already underrepresented and misrepresented,” Natalie Bell, the founder of PegCityLovely, told the crowd. “I don’t want to see you idly stand by and say it’s not your issue.”

Following the rally, the massive group headed down Broadway towards The Forks, chanting 'Black Lives Matter'

Asagwara encouraged those in attendance to take the energy at the event and demand change to what Asagwara said is a “culture of racism” against Black people in Canada.

Asagwara told the crowd to demand change from politicians and decision-makers.

“We should never have to rally like this again,” they said. “I know that collectively we can make Manitoba and beyond Manitoba a place where equity - and I mean real equity -exists, and that will mean digging deep.”

They said Manitobans will need to be vulnerable, but it will be worth it.

“It will also result in the next generation not having nightmares.”

-with files from CTV's Josh Crabb and The Associated Press