A review of court records paints a disturbing picture of a Winnipeg man now charged in what the Winnipeg Police Service (WPS) has described as the “horrifically grisly” homicide of a young Indigenous woman in North Kildonan.

The partial remains of Rebecca Contois, 24, were found near an apartment building on Edison Avenue early Monday morning.

On Thursday, the WPS announced Jeremy Anthony Michael Skibicki, 35, was charged with first-degree murder in Contois’s death. Investigators fear there may be more victims.

According to court records, Skibicki’s now ex-wife was granted a protection order against him for three years in September 2019. A justice of the peace ruled at the time Skibicki’s behaviour constituted threatening conduct under the Domestic Violence and Stalking Act.

The woman filed the protection order because she claimed in court filings she was afraid for her safety.

“I feel that I would get taken out of town and not return as his anger is uncontrollable and I cannot protect myself,” Skibicki’s ex-wife alleged in September 2019.

The woman, who CTV News isn’t identifying, alleged Skibicki kept her in his apartment for four days without any chance of leaving after their marriage. She also alleged Skibicki stalked her, tracked her phone and alleged he had sex with her while she was asleep without her consent after she took sleeping medication.

The woman, who told the court in 2019 she was recovering from addiction, alleged Skibicki used to do meth

“He believes he is my owner and I am a possession/property,” the woman wrote in her 2019 application for a protection order. “He hunts me down and controls my life.”

The WPS’s search for evidence continued Friday at his home.

A neighbour told CTV News the 35-year-old had been living in the multi-unit residential building on McKay Avenue for about six months, prior to his arrest in Contois’s homicide.

Her partial remains were found by a passerby early in the morning on May 16 behind an apartment building not far from Skibicki’s home. Investigators said Skibicki and Contois were known to each other but didn’t divulge any additional details.

“The family are devastated in the news they got and the way the Winnipeg police found her,” said Darryl Contois, a family friend with no direct relation, who helped organize a vigil Thursday night where Rebecca’s remains were found. 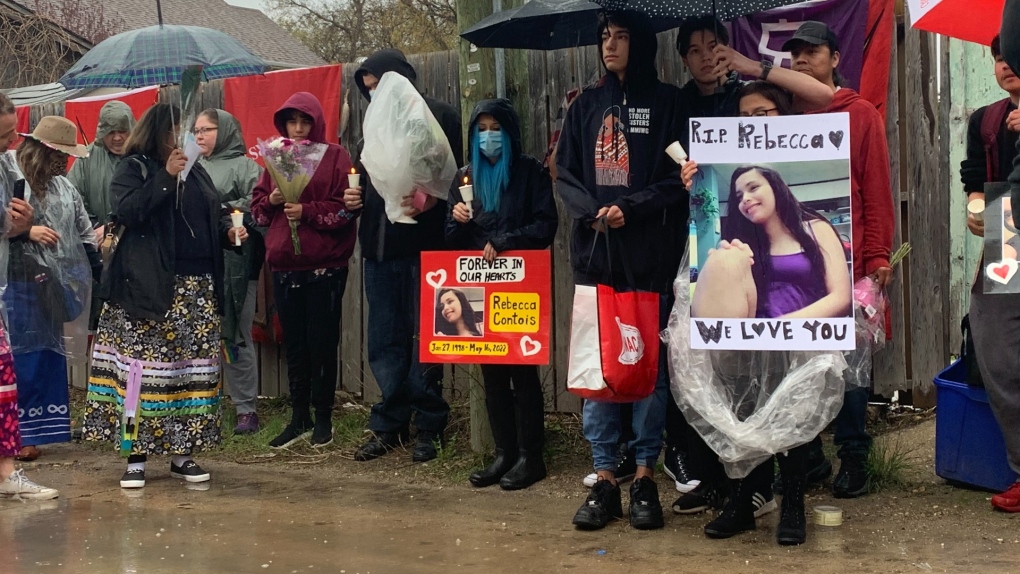 Friends and family including Contois’s mother, who was surrounded by supporters, returned to the site to honour the woman who was a mother originally from Crane River.

Hilda Anderson-Pyrz, chair of the National Family and Survivors Circle, said Contois’s death coupled with fears there may be more victims is deeply concerning.

“It’s more so about surrounding the family right now and other families who’ve been impacted,” Anderson-Pyrz said. “It’s very triggering to them, too, each time that we lose one of our Indigenous women or girls or two-spirited and gender diverse people.”

A Facebook account associated with Skibicki in court documents contains posts about holocaust denial and photos of the accused with The Iron Cross – a famous German military medal that was turned into a Nazi symbol during the 1930s.

The offence of first-degree murder Skibicki has been charged with has not been tested in court.

A man charged Tuesday with seven counts of murder after firing off more than 70 rounds at an Independence Day parade in suburban Chicago legally bought five weapons, including the high-powered rifle used in the shooting, despite authorities being called to his home twice in 2019 for threats of violence and suicide, police said.

BREAKING | Woman who was set on fire on Toronto bus has died, police confirm

A northern heatwave is melting records in Yukon and Northwest Territories, where temperatures climbed above 30 C in the Arctic Circle.