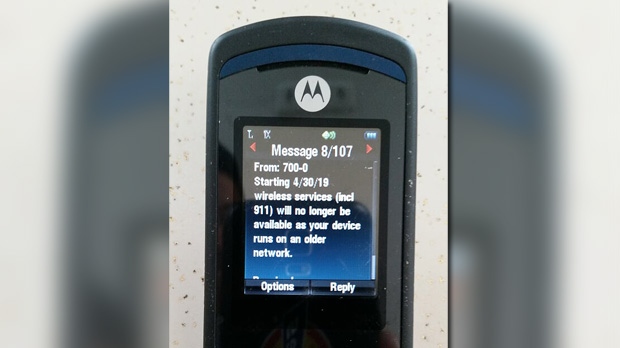 Lorna DeVos, a farmer in Fork River, received a message on her old flip phone notifying her about about the network change and replacement phone. (Source: Lorna DeVos)

A grain farmer in rural Manitoba says she is now forced to drive 25 kilometres from where she lives and works to get cell service, after Bell MTS made a change to its network.

“Now it’s quite frightening in that we’re heading into a new seeding season in terms of our business,” said Lorna DeVos, a farmer in Fork River, Man., which is about 50 kilometres north of Dauphin.

“Everything was coordinated via cellphone, like fuel deliveries and seed deliveries and fertilizer to the field, that’s just one way it impacts us directly.”

DeVos said cell service in her area was always “poor-to-mediocre at best,” but things got even worse on April 2 when Bell MTS, which shares a parent company with CTV News, switched her region over from CDMA to the latest 4G LTE network.

A few weeks prior, the telecommunications company sent the farmer a replacement phone intended to be compatible with the new network, as well as a letter informing her of the technology change.

But despite DeVos confirming with Bell MTS that her new phone was properly activated, she says she can’t get a signal unless she gets in her car and drives 25 kilometres south.

“So now my old (phone) is defunct and I have the new one. It currently functions in Dauphin, which is a half hour drive away, but it does not function where I live, where my old phone used to work,” she said.

DeVos said the loss of cell service has sparked a number of safety concerns for her and others in the community.

She’s concerned with the potential risk posed for those working in emergency services, who also rely on cellphones.

“That’s quite a scary thing when you realize your local fire department might not even get the message that there’s a fire.”

DeVos also noted that without cell service, it can be more difficult for people in rural communities to access help if they find themselves in trouble.

“I think another thing that could happen is people running into trouble and now they have to walk for help, because there’s not a lot of traffic around here and most people don’t leave their doors anymore because of the high rural crime rate, so even if you do get to a farm yard you might not get any help there. You could be moving around for a long time before anybody could help you,” she said.

Searching for a solution

In her search for a solution, DeVos said she’s reached out to two MLAs to share her concerns and was told by a staff member for one that they were aware of the issue.

“It’s very much been a one-way street communicating with them,” she said.

“And all of the phone numbers they give us for customer service or tech support, those people who answer the phone they aren’t the ones who are responsible for making the decision, so they do what they can. It’s really not up to them to decide whether this got shut off or not.”

Bell MTS told CTV News the company’s transition to LTE will be completed by April 30. They said they’ve contacted every CDMA customer, sent them a replacement phone and SIM card, and that the week the new phone is activated they will receive a text message on their old phone as a reminder.

A spokesperson for Bell MTS said one possible reason for the loss in cell service is that CDMA customers may have previously been picking up cell signals from communities nearby.

“In some areas of rural Manitoba which were never formally covered by the MTS CDMA network, customers may have been able to pick up intermittent signals from nearby communities,” said Morgan Shipley, communications manager for Bell MTS, in an email.

“This may not always be the case on the new network. We continue to expand wireless service in Manitoba as part of our $1 billion investment plan for the province.”

Hope for the future

DeVos said ideally she would get improved cell service as upgrades are made across the province, because right now she’s paying for a service that she’s not receiving.

She notes that this is a broader problem that has a ripple effect throughout the entire community.

“Everybody works together here, it’s a ripple effect. Just sort of one stone in the pond and then the ripple is going to be expanding. I mean who is going to want to move here and set up a business if you can’t get cell service?”