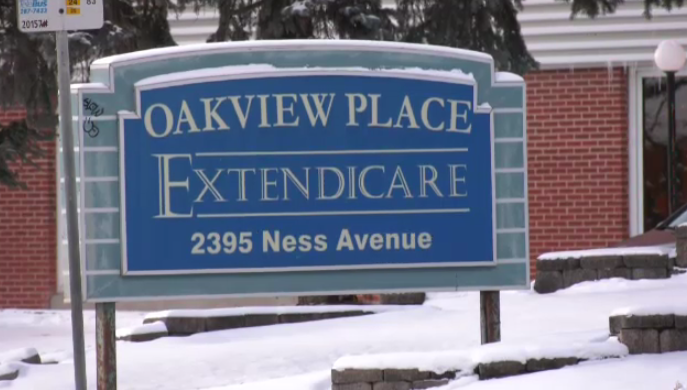 The WRHA previously said a whistleblower came forward to local Extendicare management in February with allegations that two health-care aides were mistreating residents.

Crown prosecutors are not pursuing some of the charges against two health-care aides accused of assaulting residents at a Winnipeg personal care home.

The Winnipeg Police Service (WPS) confirmed to CTV News charges were laid against Kumba Mansaray and Kadiatu Koroma in connection with the alleged assaults at Extendicare Oakview Place.

According to Manitoba court records, they are each charged with one count of assault involving two different victims.

The aides were arrested in September and released on undertakings and conditions.

WPS told CTV News when a person is released from police custody on an appearance notice or undertaking, their charges are then reviewed by Crown officials.

A spokesperson for the province told CTV News there are many possible reasons why the Crown sometimes proceeds with different charges, ranging from evidence to the likelihood of conviction. However the province declined to provide details on the specific case as "the matter is before the courts, so it would not be appropriate to comment further at this time,” the spokesperson said.

Meantime, initial court proceedings were held for both women on Tuesday.

Mansaray’s case was put over until Jan. 3, while Koroma’s was remanded until Jan. 4.

'A LOT OF UNANSWERED QUESTIONS'

Dianna Klassen’s father, David Middleton, was a four-year resident of Oakview Place before he passed away in January at 92 years old.

She said her family didn’t learn their father was an alleged victim of abuse until June, the day after they laid him to rest. Klassen said he was identified as one of the victims by one of the whistleblowers who alerted WRHA to the alleged abuse.

“In the six or seven months prior to passing, we noticed a significant change to his personality. He became very aggressive. He became very upset when people tried to change him,” she told CTV News in a phone interview.

“I think his aggression was just him trying to defend himself, because he couldn’t verbalize what was going on.”

Klassen said she is extremely disappointed each of the accused face fewer charges.

“There are just a lot of unanswered questions at this point in time,” she said.

In a statement, an Extendicare spokesperson said its residents and their families place a lot of trust in the company, and Extendicare takes its responsibility to them “extremely seriously.” The spokesperson added that this trust was broken earlier in the year, and the company “unreservedly apologizes” to its community for the distress these incidents have caused.

The statement said Extendicare has cooperated with the Winnipeg Police Service’s and the Protection for Persons in Care Office’s investigations, and the company has terminated the employment of the two health care aides involved.

Extendicare is also taking a number of measures to ensure something like this never happens again, including appointing a new regional director for Manitoba; establishing new home management; strengthening direct engagement with families; re-training staff on its abuse and neglect policies; reminding staff of the whistleblower hotline; and maintaining ongoing communications with the WRHA, Manitoba Health and government partners.

Re-building trust with our community will take time,” the spokesperson said.

“We are focused on doing the work to ensure the families of our residents can once again feel confident in the care and experience we provide to their loved ones.”

- With files from CTV’s Danton Unger and Michelle Gerwing

Parks Canada says visitors will be able to start booking reservations for camping and other activities at its sites across the country in March.

No need for every toxic chemical to have a pollution plan, Ottawa says

The federal government is playing a dangerous game by refusing to force any company that makes or uses toxic chemicals to have a plan in place to prevent them from getting into the environment, a lawyer for the Canadian Environmental Law Association said Monday.