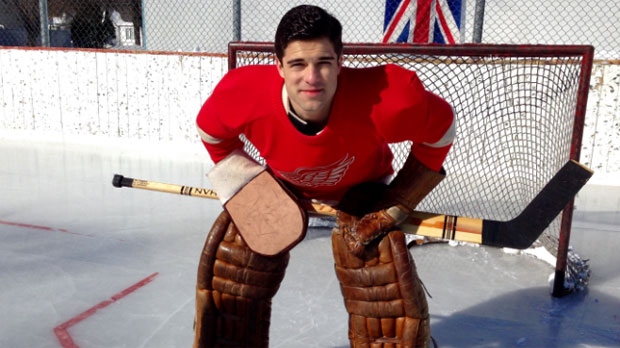 Winnipeg-actor Markian Tarasiuk (above) is playing Terry Sawchuk in a film about his life.

When you think of legends from Winnipeg, certain names come to mind - Jonathan Toews, Billy Mosienko and Joe Daley. Soon, the story of another great NHLer from Winnipeg will be told as well.

A movie is being made about Winnipeg goalie Terry Sawchuk.

"One could argue he was the best NHLer to come out of Winnipeg thus far,” said Travis Daley, son of Joe Daley.

Born in 1929 to Ukrainian-Canadian parents and raised in East Kildonan, Sawchuk played 21 seasons in the NHL.

He won four Vezina trophies, four Stanley Cups and had a reputation for being tough as nails.

"His mum was so strict. He was supposed to be going to church but instead he was roughhousing with his friends, breaks his elbow and doesn't tell them. So, it fuses unbending. He could never straighten it,” said Danny Schur.

Despite that, Sawchuk became one of the greatest goalies of all time.

Schur said his success story isn't as well-known as it should be and he intends to change that.

"To put this stuff on and imagine it's all he had, without a mask, going in front of pucks that are going 100 km an hour, I couldn't even imagine," said Tarasiuk.

"I get hit in the face and your ears are ringing, and you feel like you got slapped in the face as hard as you can. And that's with a thousand dollar mask on your face,” he said.

Sawchuk would end up looking like Frankenstein’s monster with more than 400 stiches on his face.

Still, he became a legendary figure in NHL history - a legend that will now be celebrated in film.