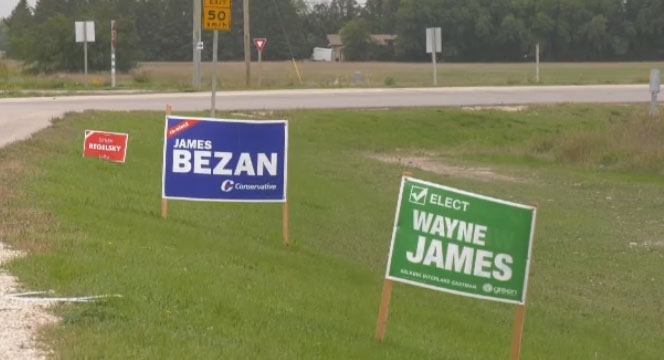 One political expert said a Tory-stronghold riding in Manitoba is an example of a growing divide between rural and urban voters.

The campaign trail isn’t anything new for James Bezan.

The incumbent candidate for the Selkirk-Interlake-Eastman federal riding is in the homestretch of his seventh election.

Wednesday he was in Stonewall talking to voters before election day.

“This is a big riding and very diverse. There’s over 70 communities here, so we’re making multiple visits to all our major towns and hitting all our little hamlets as well, just to make sure everyone knows they’re important.”

Bezan has held the seat for the Conservatives since 2004.

He’s an agriculture producer, and said the drought’s had a terrible impact on other producers in his riding.

If re-elected his focus will be on securing them financial support.

“We have to make sure that assistance is available to feed livestock, to ensure that people have cash on hand to get through this winter and pay their bills.”

Associate Professor of Political Science at the University of Winnipeg, Malcolm Bird said Selkirk-Interlake-Eastman is a very secure conservative riding, and it’ll be a real challenge for other parties to take the seat.

“The NDP has done reasonably better than the Liberals in a number of elections, but they’re far behind the Conservatives and certainly Mister Bezan.”

Bird said Selkirk-Interlake-Eastman is an example of a political development we’re seeing in Canada.

Looking to change the riding from blue to red is Liberal candidate Detlev Regelsky.

It’s his second run at the seat, and he said the climate crisis is top of mind for him and his party.

With less than a week until the election, Regelsky said he’ll be on the road meeting with the diverse group of people that live in his riding.

“Mainly listening to what they have to say, and presenting the platform that I feel is the best platform, the Liberal platform of course.”

Other Candidates in the Selkirk-Interlake-Eastman riding are Margaret Smith from the NDP, Wayne James from the Green Party, and Ian Kathwaroon from the People’s Party of Canada.