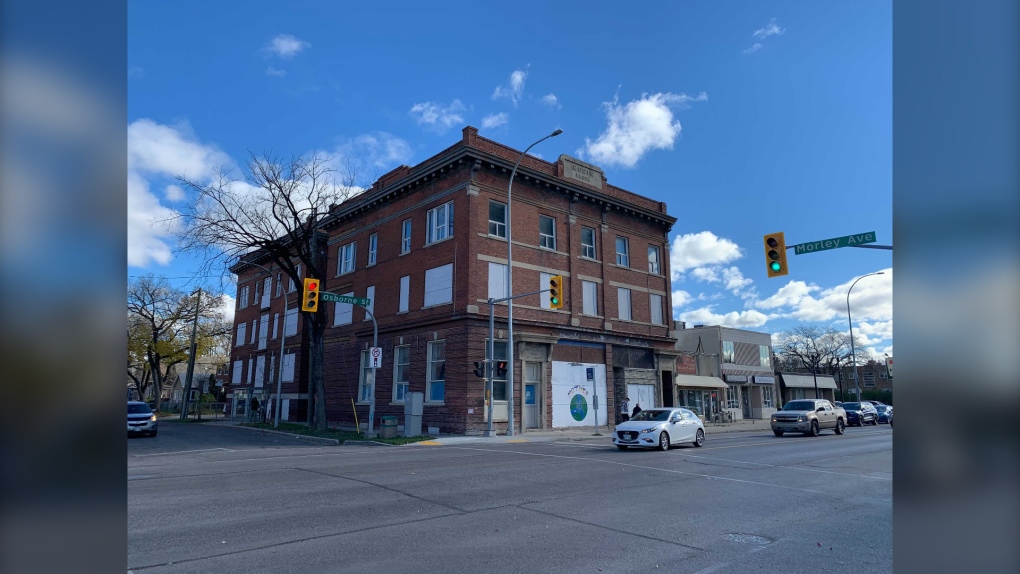 The Rubin Block was built in 1914 and designed by Winnipeg architect Max Zev Blankstein, who designed a number of buildings in the city in the early 1900s, including the Uptown Theatre. (Image Source: Jamie Dowsett/CTV News Winnipeg)
Winnipeg -

A fire that destroyed a building Sunday has sparked concerns about a vacant retail and apartment complex in South Osborne.

The Rubin Block sits at the corner of Morley Avenue and Osborne Street. While it is now empty and boarded up, many in the community see its potential as a way to revitalize the community, using its 21 apartments and retail space to provide affordable housing in Winnipeg.

The building was also been placed on the National Trust for Canada's top 10 list of endangered buildings in 2019.

Advocates for the building's redevelopment say there are ones just like it across the city, and they're concerned it could suffer the same fate as other properties recently destroyed by fire.

“The recent fires on Main Street and the one in the yard in Point Douglas just bring home the fact of how vulnerable these buildings are,” said Jean Altemeyer, a member of the Rubin Block Advocates.

The concerned community group says efforts to have the building renewed or sold have not worked.

“Absolutely frustrating. The city isn’t getting taxes that it should. The community has this huge, empty building on this prominent corner with all of this new business around it. The problem is, if owners comply with the existent bylaws, the city says its hands are tied,” Altemeyer explained.

The group would like the city to increase fees and fines for keeping a building vacant, tax these vacant properties as if they are being used, and not extend timelines when a bare minimum of work is done.

Ward councillor Sherri Rollins said she directed and voted on a motion that passed over two years ago to increase fees to the vacant building bylaw, noting there is a rate for those who may have a property vacant for up to five years for renovation purposes, and another for permanent vacancies that carry various risks.

“The motion I supported not only increased fees to the vacant building bylaw, creating one of the toughest in the country, but also drew a direct line to direct the fees toward a housing rehabilitation reserve that maintains people in housing by renovating and rehabilitation.”

CTV News reached out to the owner of the building but has not yet heard back.

- With files from Danton Unger