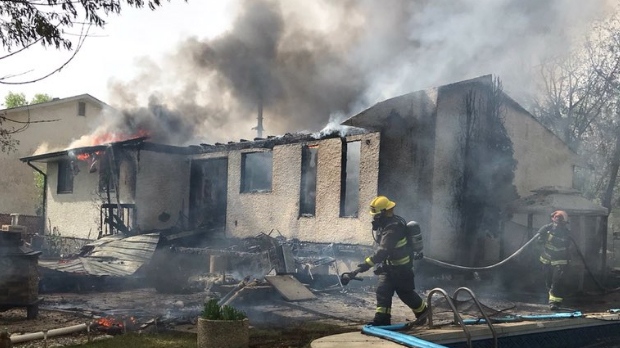 Just after 9:10 a.m. the Winnipeg Fire Paramedic Service went to a bungalow in the 2500 block of Knowles Avenue. (Source: City of Winnipeg/Twitter)

A North Kildonan home is expected to be a total loss following a Saturday morning blaze that left a firefighter with a minor injury.

Just after 9:10 a.m. the Winnipeg Fire Paramedic Service went to a bungalow in the 2500 block of Knowles Avenue, and found the fire had burned through the roof.

Firefighters took a defensive approach to extinguishing the flames, due to the possibility of the house collapsing.

The City of Winnipeg said because the house is outside its water district, two WFPS tanker trucks were used for the water supply.

It’s expected that fire crews will stay at the scene into the afternoon to make sure hotspots are extinguished.

No one was home during the fire, but the neighbouring homes were evacuated for precautionary reasons. One firefighter was hurt and checked by paramedics.

The cause of the fire is being investigated and no damage estimates are available at this time.