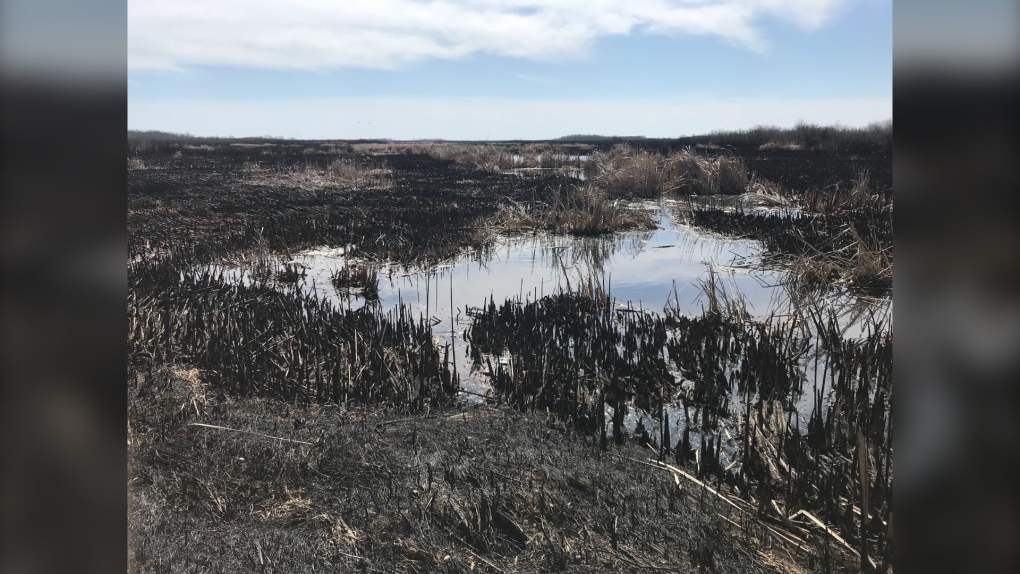 The remnants of a grass fire are seen near Zhoda, Man. on April 6, 2021. Residents in the region are concerned the dry spring will result in a busy wildfire season. (CTV News Photo Josh Crabb)

ZHODA, MAN. -- A grass fire that burned in southeast Manitoba is out now, but it hasn’t extinguished concerns over the dry spring conditions in the southern part of the province.

Fire crews were called to a large fire on a piece of marshland near Zhoda, Man. Monday afternoon and worked early into the morning to stop it.

It is only the start of what some worry could be a busy grass and wildfire season.

“The warm weather, the lack of snow, has certainly brought all of this to the forefront quickly,” said Bob Fosty, who serves as the fire chief for the R.M. of Stuartburn.

His fire department was called around 2:30 Monday afternoon and worked early into the morning to put out the fire and protect about 10 nearby properties, including some homes.

Fosty said about 300 acres of land burned, including a marshy area where it is believed the fire started.

He said the swamp made it virtually impossible for fire crews to get on to the land to fight the flames, which spread easily through dried grass and bulrushes, despite the water underneath.

It forced crews to contain it from roads along the perimeter of the fire, which eventually burned out when it moved south and reached the Rat River, but not before flames spread both east and west.

No cause has been determined and no injuries or property damage has been reported.

Eric Mateychuk was working on a tractor when he saw a large plume of smoke west of his home and farmyard near Zhoda.

“It looked pretty big,” said Eric. “I took a drive and it looked like it could’ve escalated big because it was all just swamp back there.”

After seeing the fire, Eric went to see if anyone needed help and alerted his dad, Brad.

“When he gave me the call, you could kind of hear a bit of panic in his voice,” said Brad. “I mean being so dry and it was windy and that, I don’t think I can ever remember seeing dry conditions like this for this time of year.”

It was the third fire in the area in just as many days after crews fought flames north of Vita, Man. Saturday and Sunday. It is believed those fires were initially sparked by the exhaust from a passing vehicle.

“Between the two days, it was about 900 acres of farmland that had burnt,” said Fosty. “Our crews were out for 20 plus hours over the course of two days.”

It’s prompted some municipalities to issue burn bans but that’s not all. 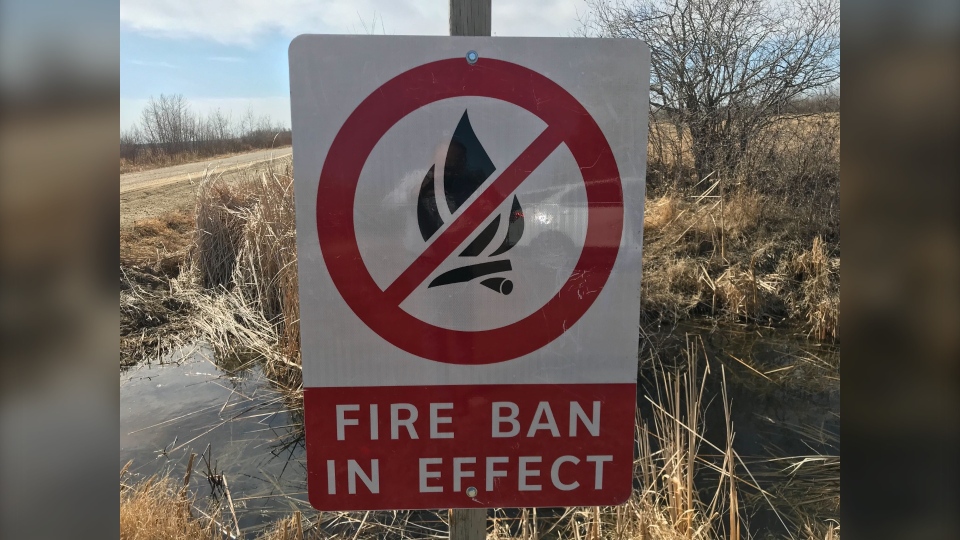 Experts have previously warned dry springs like this could become more common because of the impact of climate change.

They say it is leading to shorter winters which, mixed with little precipitation, can lead to tinder dry conditions earlier in the spring.

While the Mateychuks said they have enough hay from last year to feed their 80 head of cattle, they worry about what a dry spring will mean for this year’s crop.

“Every morning, you kind of get up and look for the forecast and kind of hope maybe we’ll get some rain because you kind of need some rain right now,” said Brad. “Any kind of little spark or anything like that can really do some bad damage.”