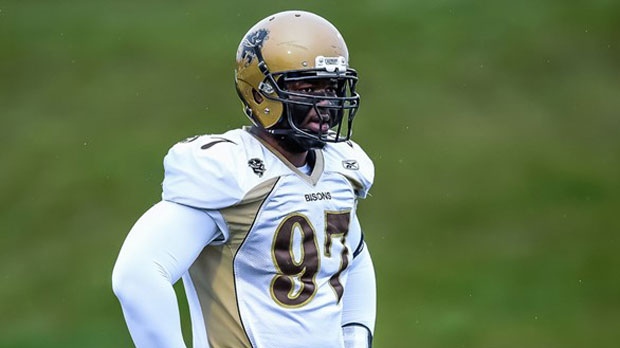 METAIRIE, La. -- The New Orleans Saints have made a trade to acquire a fourth-round draft choice from Washington and used it to select defensive tackle David Onyemata on Saturday.

The 6-foot-4, 300-pound Onyemata, a Nigerian who played college football at Manitoba in Canada, is New Orleans' fourth overall draft choice. The Saints entered the day without a fourth round pick because they had used it, along with their third round pick, to acquire Ohio State safety Von Bell in Friday night's second round.

New Orleans also does not have a sixth-round pick because of a trade last year, leaving the Saints only one more draft choice in Saturday's seventh and final round. New Orleans sent Washington fifth round picks this year and in 2017 in the deal.

Saints coach Sean Payton had made it clear leading up to the draft that finding help for a defence that has ranked 31st in the NFL in each of the past two seasons was a priority.

The one offensive player the Saints have drafted this year is Ohio State receiver Michael Thomas.

Onyemata, whose draft stock rose with his showing at the East-West Shrine game, is the second players since 2012 to be drafted by New Orleans after playing college football in Canada. The earlier pick also was a defensive tackle. That was Akiem Hicks, who played at Regina, although Hicks, a Californian, only went to Canada after leaving LSU because he was at the centre of recruiting violations.

By contrast, Onyemata did not grow up playing football in Africa, but had a strong showing last season with 50 tackles, five sacks and 7 1/2 tackles for losses.