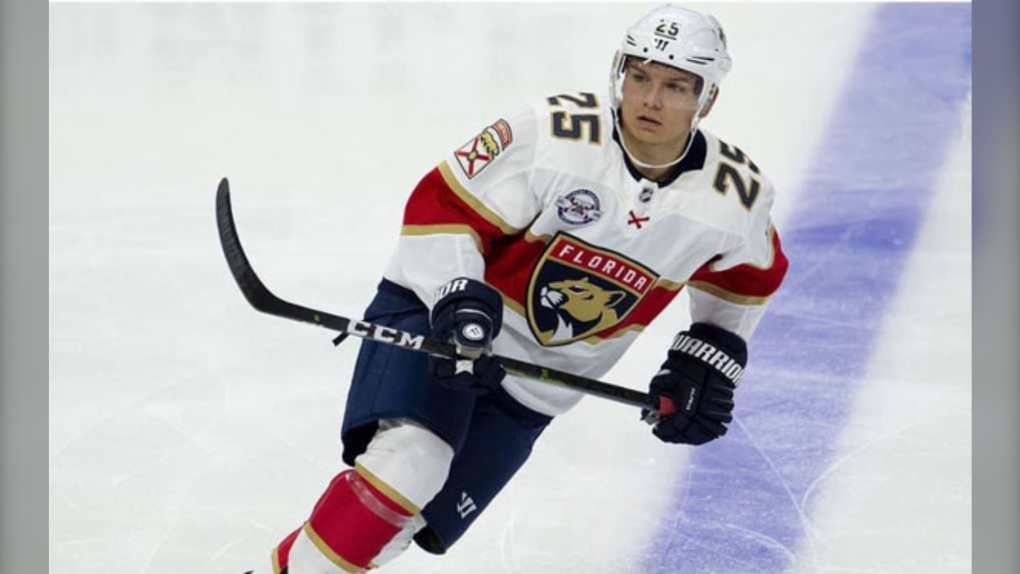 Brady Keeper is pictured playing for the Florida Panthers in an undated image (Source: crosslakeband.ca)

WINNIPEG -- One of the biggest cheering sections for the Florida Panthers this summer could be found in one community almost 2,900 kilometres away from Toronto, where the team was playing in the NHL playoffs.

Residents of Pimickikamak Cree Nation, located eight hours north of Winnipeg, were throwing their support behind Cross Lake's Brady Keeper, a defenceman with the Florida Panthers, who played in his first NHL playoff game this week.

“When we first heard he was going to be in the playoffs, we were ecstatic about it,” said Chief David Monias on Friday.

“In our lifetime, we thought, someday one of our players would be there, because we have some good players in the community, and to be able to see one of our very own citizens in the lineup, and skating out, that was awesome.”

Monias said the First Nation closed its offices so residents could watch the game, which saw the Panthers lose 4-2 against the New York Islanders. Keeper logged 13 minutes of ice time in the game. The Panthers were defeated 5-1 in Game 4 on Friday to be eliminated from the playoff qualifiers in Toronto, which is serving as the hub city for the Eastern Conference. Keeper was not on the roster for that game.

“It’s nice having an NHL person in our community, but he‘s still a regular person when you see him,” he said. “He has a lot of humility, and kids look up to him. Even when they see his dad, he’s known as Brady’s dad in the community.”

“There are opportunities that exist outside of the community and that if you put your mind to it, and have the supports, you can do it,” he said.