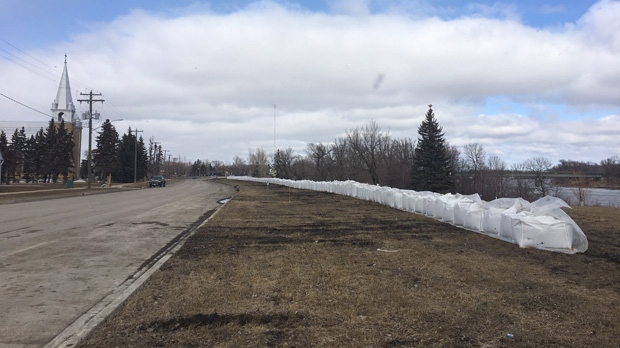 The province said the Red River is now expected to peak at levels equal to 2011 or slightly lower, an improvement to the forecast attributed to favourable weather.

The risk of flooding is down at all points along the Red River in Manitoba, the province said Tuesday.

Earlier forecasts predicted the river could reach levels as high as it did in 2009 or even higher. Highway 75 was closed for more than a month that year due to flooding.

The province said freezing temperatures overnight will continue to slow the melting process this week, and a recent weather system with precipitation passed by most of the Red River basin.

While the forecast has improved, a flood warning is now in effect on the Red from Emerson to the Red River Floodway channel inlet, meaning it has reached flood stage or is expected to reach flood stage within 24 hours.

The floodway is likely to be in operation between Friday and Sunday, and crews are prepping a number of communities to close ring dikes if necessary, the province said.

In Emerson, a ring dike is being partially closed but people can still get in by road. The Red River is expected to crest there between April 16 and 19, and in Winnipeg between April 20 and 23.

As for other Manitoba rivers, the province said the Assiniboine, Qu’Appelle and Souris rivers have peaked or, at some points, are near peak. A flood watch, meaning flood stage is expected soon but not within 24 hours, has been issued for the Roseau Rivers.

The province reminds property owners in flood-prone areas of the Red River Valley to protect wells against the high water and said more information on how is available online.

READ MORE: Communities along Red River bracing for high water on both sides of the border

The R.M. of Ritchot said in its latest flood report  Tuesday that with the forecast being downgraded to 2.5 to three feet lower than 2011 levels, plans for road closures, dike closures and evacuations will change. Officials are re-evaluating a plan to augment the village dike around Ste. Agathe to protect against a 2009 plus two feet flood.

The R.M. said people who live within the ring dikes around St. Adolphe, Ste. Agathe and Grande Point are not at risk for evacuation, and though the dikes are being partially closed, residents will be able to enter and exit the communities using Highways 75 and 59.

The City of Winnipeg said on Tuesday it’s reduced the number of properties that may need a dike to protect from flooding from 123 to 18, which will require 14,400 sandbags.

Property owners who were initially thought to be at risk but are not anymore will receive a notice that advises them to remain on standby in case conditions change.

To determine which properties are at-risk, the city is using a peak of 19.6 feet at the James Avenue gauge, nearly one foot less than what the city had initially been planning for. The river is expected to reach this peak over the Easter long weekend.

The city has started to deliver sandbags to properties that may need a sandbag dike, with a clay dike being built at one location.