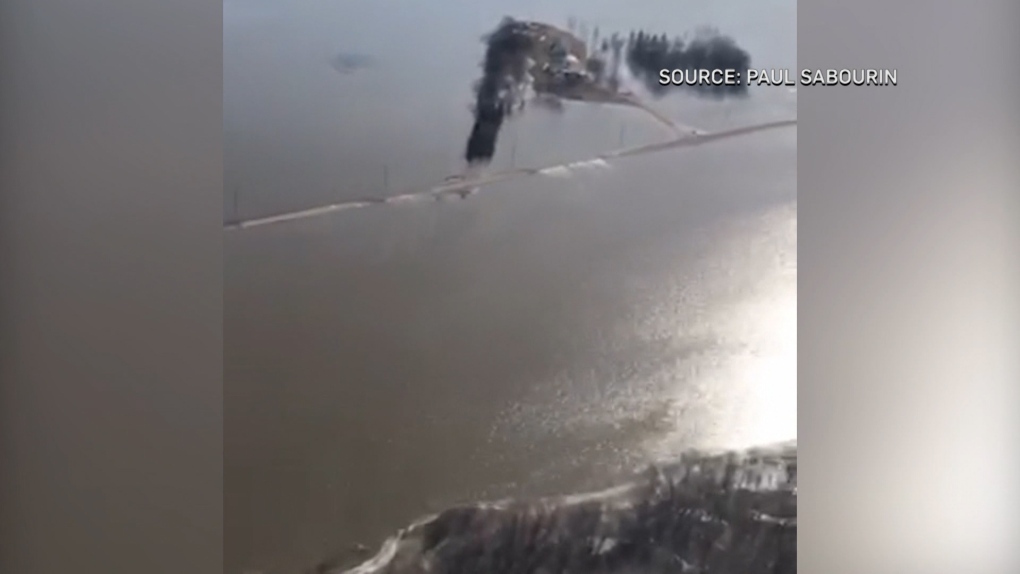 Flooding in the RM of Montcalm (courtesy Paul Sabourin)

The premier made the announcement at a news conference on Wednesday.

Pallister said these projects will help the province’s infrastructure’s to adapt and withstand natural disasters, extreme weather, and environmental changes. He noted the province made a smaller investment last fall and now it is adding to it after consulting with municipalities and stakeholders to identify their top priorities.

“$16 million of these dollars will help create a flood-proof route from Winnipeg to the United States border at Emerson and we all know too well that parts of Highway 75 end up underwater every few years,” he said.

“To give commercial traffic an alternate route, we’ll pave Provincial Road 246 from the Morris area to Aubigny.”

The premier said this means Manitoba can stay open for businesses in times of high water and flooding.

One of the projects he mentioned includes improvements to help St. Mary’s Road in the R.M. of Montcalm.

The road gets damaged by spring floodwaters, and the announcement comes as welcome news for the RM's Reeve Paul Gilmore.

"We've been lobbying for mitigation on that side of the river for a long, long time and this is wonderful news for us," Gilmore told CTV News.

He said spring flooding causes close to $1 million in damages to the road each year, adding this year was one of their worst ever.

He said the government is looking at starting the project in 2020, though he said the particulars have not been sorted out yet.

"The sooner the better for us," he said.

Pallister noted other projects include pump house expansions in the R.M. of Rhineland; berm construction in St. Pierre-Jolys; upgrades to the Elkhorn lagoon and lift station; a Kenton supply wells generator backup in the R.M. of Wallace; and a downtown drainage upgrade project in Altona.

“Your provincial government is funding 100 per cent of these projects to help support the long-term sustainability of our communities,” Pallister said.

He noted the province also has additional funding available for capital region projects. The government will continue to work with stakeholders, and by the end of June will compile another list of project priorities.

“The key to our turnaround is going to be strong economic recovery,” Pallister said.

“And Manitobans will get there by sticking to the fundamentals."