For the 'W': Bomber flag raised at City Hall as team heads to Grey Cup

WINNIPEG -- Fans of the Winnipeg Blue Bombers are decked out in blue and gold as Grey Cup fever sweeps across Manitoba.

Winnipeg City Hall got into the act Tuesday morning, by raising the Bombers’ “W” flag.

The Winnipeg sign at the Forks is also being lit up in blue and gold until Sunday’s Grey Cup final.

The Bombers are back in the Grey Cup for the first time since 2011.

The team leaves on a flight for Calgary this afternoon.

They haven’t been able to hoist Lord Grey’s mug in victory since 1990. 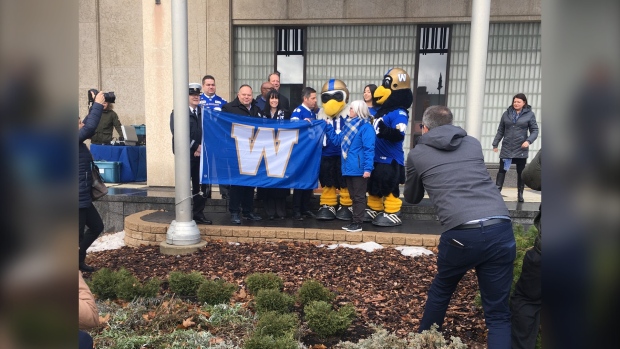 Mayor Brian Bowman leads the proceedings as the Blue Bombers "W" flag is raised, November 19, 2019 at City Hall in advance of the team's appearance in the 107th Grey Cup. (Glenn Pismenny/CTV News.)