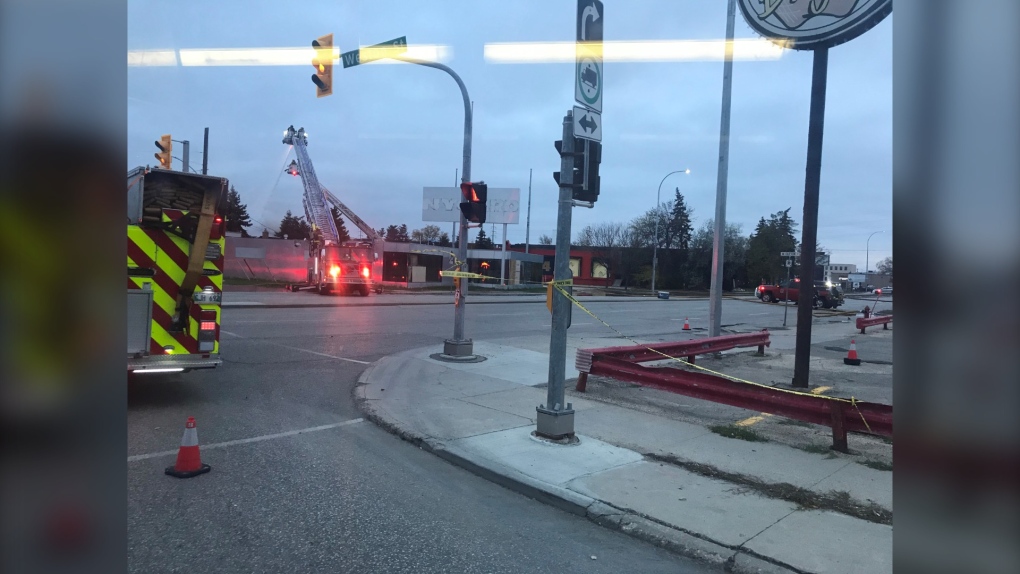 A building in Winnipeg’s West End has gone up in flames, causing major damage to the structure.

Just before 6 a.m. on Tuesday, crews with the Winnipeg Fire Paramedic Service (WFPS) responded to a fire alarm in the 1300 block of Notre Dame Avenue at the former Nygard building. According to the City of Winnipeg, a second alarm was also called to increase the number of crew members and amount of equipment sent to the scene.

Once on scene, firefighters found heavy smoke and flames coming from the building. Crews attacked the fire from outside the structure, as it was unsafe to go into the building. Firefighters used aerial ladders and handlines to extinguish the fire.

The city said crews also worked with a private company to take down part of the building to gain access to fight the fire from the inside.

Firefighters also used a drone to help with situational awareness and to direct crews to the exact locations of the flames.

No one was hurt in the fire and the fire was considered under control by the early afternoon.

Notre Dame Avenue was closed in both directions from Erin Street to Flint Street. Emergency crews have now cleared the scene, and all lanes are open to traffic.

One apparatus is expected to stay at the scene to deal with any flare-ups through the night.

The city notes that due to “atmospheric conditions,” smoke was being pushed to the ground level. Anyone who is sensitive to smoke should avoid the area.

The City of Winnipeg said it expected this to be a prolonged event and crews were expected to stay on scene for an extended period.

The city said no damage estimates are available yet but noted the building suffered extensive structural damage.

In 2020, the property was one of several properties put up for sale after Nygard’s companies went into receivership.

During a hearing last year, Nygard said in a sworn affidavit that he lived in an apartment in the warehouse when he wasn’t living in the Bahamas.

"1340 Notre Dame, Winnipeg, Manitoba has been my residence for in excess of forty years, while I was a non-resident of Canada and a permanent resident of The Bahamas," Nygard wrote in the affidavit.

"I have been continuously residing at 1340 Notre Dame, Winnipeg, Manitoba, and have been a permanent resident of Canada in excess of one and one-half years."

On Oct. 1, 2021, the former fashion mogul consented to extradition to the United States to face sex trafficking charges in New York. None of the allegations have been proven in court.

Toronto police also charged Nygard with historic sexual assault charges in connection with alleged incidents that occurred as far back as the 1980s. His lawyer Brian Greenspan said Nygard denies, "any allegations of criminal conduct."

-With files from CTV’s Danton Unger, Mason DePatie and The Canadian Press.