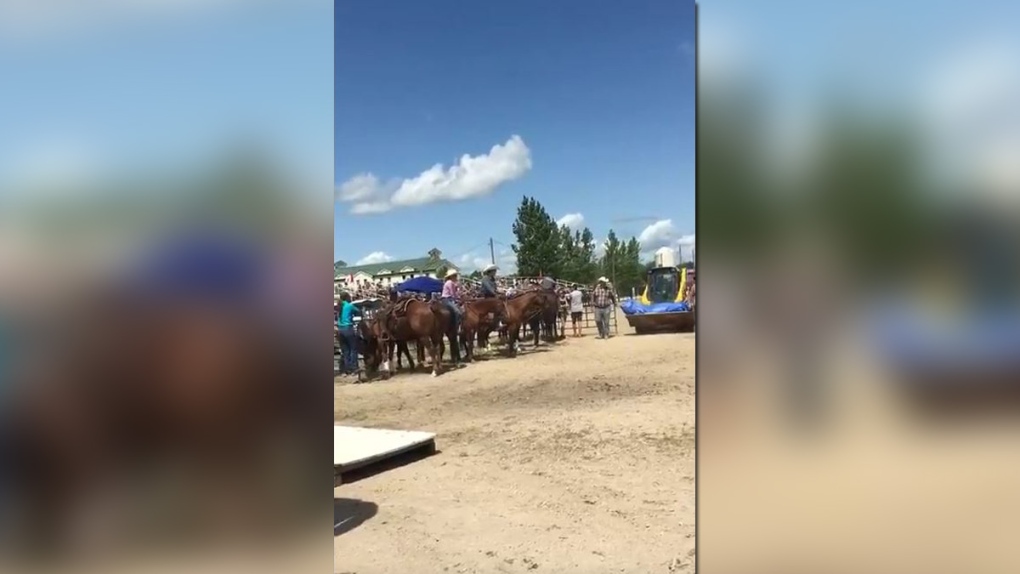 A heifer died following a competition at the Manitoba Stampede Saturday afternoon. (Source: Manitoba Animal Save)

A heifer has died at the Manitoba Stampede after a cattle control competition.

Darcy Brown is a board member with the Manitoba Team Penning Association and confirmed the death to CTV News.

He said the incident happened in the middle of a competition Saturday afternoon. The event is not part of the rodeo, which has been taking place in Morris for 56 years.

The heifer tried to jump onto a fence and because of the way it landed, the animal had to be euthanized, Brown said in a phone call with CTV News.

“I’ve never seen anything like it,” he said. “It’s a freak accident.”

Brown said a veterinarian checked the heifer and recommended she be sedated. He said the heifer was moved in a yellow piece of equipment and covered with a tarp because of the animal’s weight and to prevent people from seeing it after the incident.

Brown said the show was stopped for several hours and organizers explained that everyone was shaken up because of their concern for the animal.

In four years of competition at the stampede and 10 years in penning competitions, Brown said he has not seen a heifer act this way.

He said the cattle control competition is about showing the talent of one’s horse, a sport to move cows around. The judge watches as someone on horse enters an area with 30 cows and tries to get one with a specific number to a specific location.

Brown said no ropes are involved, and no one is allowed to touch the animals or scream at them.

The heifer’s death follows an animal right’s protest Friday calling for the Manitoba Stampede’s rodeo to be shut down.

On Sunday Manitoba Animal Save said it received two reports about the death and issued a release.

“We plan to send the animal cruelty footage we received to the Manitoba Provincial Vet as well as the Canadian Veterinary Association to ask for an investigation into rodeo deaths and cruelty in Manitoba. Manitoba Animal Save encourages the public not to support these events,” it said.