From sports to Pokémon, trading card popularity is on the rise amid the pandemic 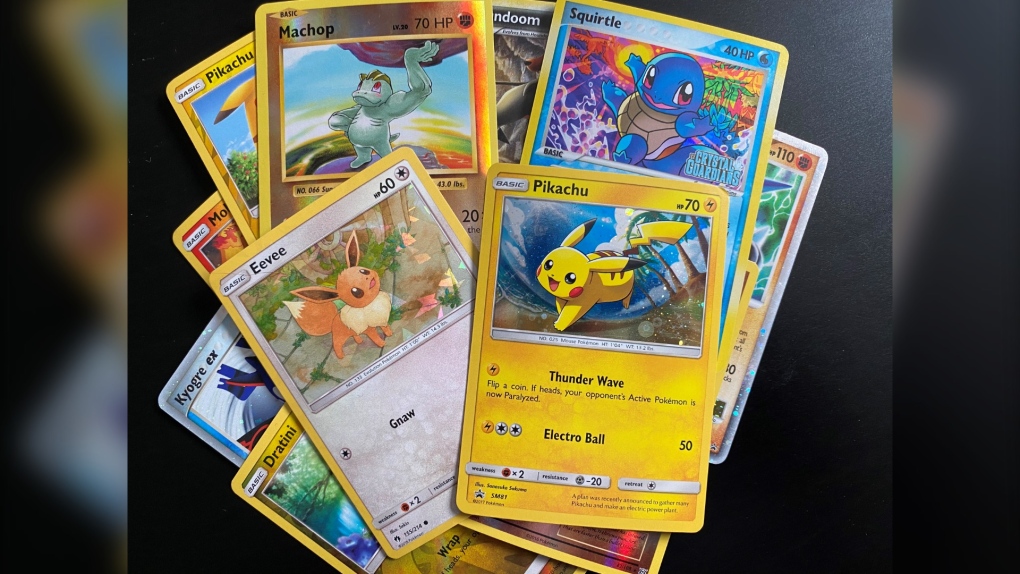 A pile of Pokémon cards that feature Pokémon such as Pikachu and Eevee. (Source: Devon McKendrick/CTV News)

WINNIPEG -- As people have been hunkered down at home during the pandemic, the popularity of trading cards has skyrocketed.

People have been finding their old collections of cards—everything from sports to Pokémon.

Mike Bergmann is the owner of Lower Level Sports Cards and Collectibles and said the pandemic has helped people get back into collecting cards.

"People who were stuck at home, they started going through their old collections," he said, "When they found holes in their sets, they would call or message asking if I had certain cards."

He said he even started to notice the craze grow again just before the pandemic with things like the Chicago Bulls and Michael Jordan documentary "The Last Dance" or even the death of Kobe Bryant.

Bergmann's store has been closed to the public since the pandemic broke out last year but he said they have still been doing business via email and curbside pickup.

Lately, he said it has become quite busy.

"We've seen a huge increase in people emailing and calling," he said, noting the weekends have been extremely busy.

"With the amount of people picking up, if that is any sign, I would have had to have five people in my small shop just helping people."

While many people have started the hobby again and try to complete the sets they already have, Bergmann said collecting cards has also turned into quite an investment due to the value of some cards.

He said there have been some big-ticket items that have sold recently as well throughout the world, such as a Michael Jordan card that went for $800,000, a Wayne Gretzky card that sold for around $1 million, and most recently, a signed rookie Luka Doncic card went for $4.6 million.

While there has been a boom with sports cards, Bergmann said it isn't quite the same as it was in the ’90s.

"In the ’90s, people bought every kind of card, it didn't matter. There were a lot more collectors who wanted to make sets and have fun with it. Now people are a lot more specific," he said, using the example that if there is a set of 500 cards, the majority of people are only looking for five in that set because they are the moneymakers.

While sports cards have been popular, they aren't the only ones that have made a comeback amid the pandemic.

Kailyn Gregorash, the manager of Cobra Collectibles, said cards such as Pokémon, Yu-Gi-Oh!, and even Magic: The Gathering, have been all the rage.

"The longer people stay at home, the more they think back and want things that are more nostalgic, and trading cards are definitely nostalgic," said Gregorash.

She said right now, Pokémon has been the most popular item for people to collect. She added people seem to be hoarding some of the bigger ticket items, but she expects that to change once restrictions are lifted even further. "We're looking forward to it."

If people are looking at getting into the hobby of collecting any kind of cards, Gregorash has some advice on how to best do it.

"Search everywhere you can to try and find them and keep good care of them," she said, "Keep them safe, keep them secure."

Gregorash suggests people invest in plastic folders or binders to best take of their cards.

"Do it for the love of the hobby and for the collecting," he said, "If you do it for the investing, money is fleeting. Friendships and just having fun in the hobby, that's not. It creates memories."