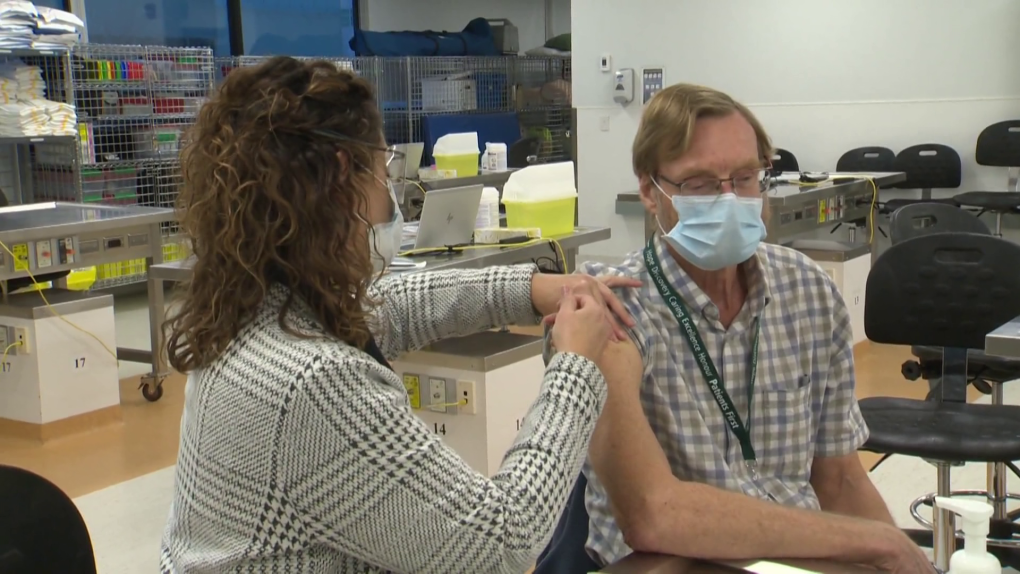 It comes nine months after the province’s first confirmed case of the virus and on a day when the province recorded 15 additional deaths and 292 cases.

While the vaccine's arrival provides a glimmer of hope, health officials caution defensive tactics are still needed to contain the coronavirus.

But on Wednesday morning there were cheers and what appeared to be smiles behind masks.

The first doses of the vaccine were injected into the arms of frontline health providers inside the province’s first immunization clinic, at the University of Manitoba’s Rady Faculty of Health Sciences Bannatyne campus.

“I’m very fortunate and it’s a luck of the draw as to how I got here,” said Penner. “It was not expected.”

Nine hundred frontline health professionals are expected to receive their first dose of the Pfizer-BioNTech COVID-19 vaccine over the next three days. The vaccine is delivered in two separate shots.

Priority is being given to higher-risk providers—those who work in immunization clinics and critical, acute or long-term care facilities.

Sherry Plett, an emergency department and intensive care nurse at Boundary Trails Health Centre between Morden and Winkler, drove in early Wednesday morning to get her shot.

“I feel immunization is the beginning to the end,” said Plett, who celebrated with a little dance after getting her first dose of the vaccine.

It’s a day public health officials said gives a glimmer of hope to Manitobans who’ve been enduring the health, social and economic consequences of the pandemic.

“We’ve been dealing with this virus for nine months, we’re going to have to deal with it for many more months but today we start fighting back,” said Dr. Brent Roussin, the province's chief provincial health officer, during a COVID-19 briefing Wednesday.

Officials said with only a very small fraction of the population getting the vaccine early on, Manitobans will have to continue living under restrictions and follow public health guidance to curb transmission—that means no gatherings over the festive season.

“There’s an opportunity to start off the New Year in a relatively good spot, if we don’t do that then we’re going to run into some trouble again,” said Dr. Jazz Atwal, acting deputy chief provincial public health officer.

Back at the vaccination clinic, health providers who got the shot hope others will do the same when they can.

“I feel the science is very strong and this vaccine is safe and my presence here today is a testament to that feeling,” said Dr. Brian Sharkey, a family physician who received the shot Wednesday.

The province has said all of the individuals immunized at the Bannatyne campus will receive their second dose of the vaccine at the RBC Convention Centre. It’ll be the province’s first ‘super-site’ for vaccine storage. An ultra-low temperature freezer has been installed at the site but there’s no official word on exactly when it’ll open.

The province said additional doses of the vaccine are expected to be delivered later this month.

Officials said they’ll provide more details when they know the type and amount of vaccine that’s coming. The Moderna vaccine is expected to go to remote communities because it doesn’t have to be kept at the same ultra-low temperatures as the Pfizer-BioNTech vaccine, making it easier to ship.