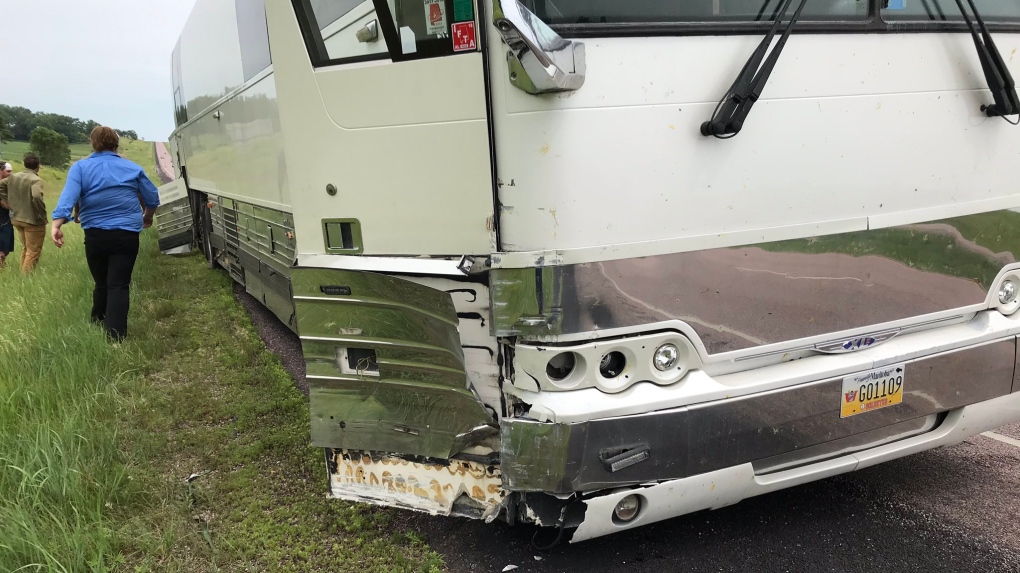 WINNIPEG -- The Winnipeg Goldeyes Baseball Club took an unexpected pit stop on Friday when their bus blew a tire and hit a guard rail.

"All the guys were asleep in the back, and I just screamed about three times, hold on, hold on, hold on," said Kash Beauchamp, the team’s batting coach who was sitting at the front of the bus at the time.

The team was travelling from Fargo to Sioux Falls when the incident occurred.

"You heard the whole front right tire of the bus explode," said Beauchamp. "I mean, it just blew out, and the bus almost got out of control."

He said the bus was travelling downhill at about 75 miles per hour when the tire blew.

"[The driver] was just fighting to keep control of it," said Beauchamp.

The bus careened to the right and hit a wire guard rail.

"It snapped about five of those [poles] like they were toothpicks," Beauchamp said.

Hitting the rail also popped the back tires, which helped to slow the bus. Beauchamp estimates it took a quarter of a mile to stop the bus.

After the bus came to a stop, the team exited, and another bus picked them up. No one was injured in the ordeal.

"It very easily could have been a lot worse," said Beauchamp, who noted that if the bus had gone off the shoulder, it likely would have flipped.

What is the American Association record for on-the-job automobile accidents in one week? Thankfully we are all OK, and plan to play tonight. pic.twitter.com/IU8KQnYgEv

Danielle Doiron, a spouse of one of the players, also posted a photo with a caption that said in part, "Beyond grateful for highway guardrails after the [Goldeyes] bus crash earlier today."

She said her husband, Kevin McGovern, told her the guardrail stopped them from flipping into a ditch. The rail ended about five feet from where the bus made contact, and Doiron said it easily could have been much worse.

The Goldeyes are one of six American Association teams competing in a shortened season. As the league's only Canadian team, it is playing as a "road-only" team this season.

The Milwaukee Milkmen, Sioux Falls Canaries, Chicago Dogs, and the Fargo-Moorhead RedHawks are sharing their stadiums with the road-only teams and acting as hub cities.

So far, the Goldeyes are 4 and 3 this season, putting them third among the six teams.