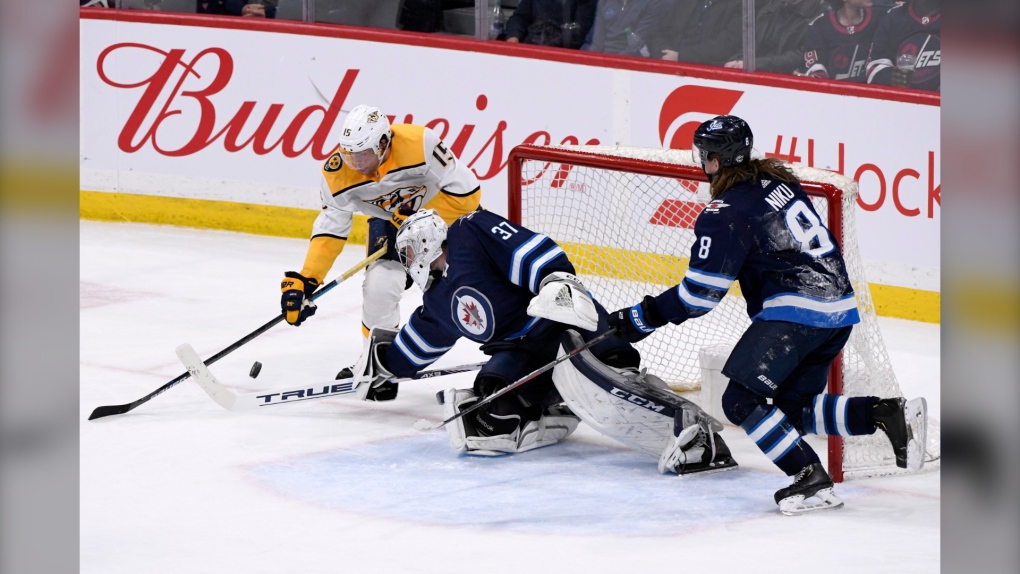 WINNIPEG -- WINNIPEG -- Mikael Granlund knew it wasn't a perfect shot, but the result was.

Granlund scored 1:11 into overtime to lift the Nashville Predators to a 2-1 victory over the Winnipeg Jets on Tuesday. Granlund's blast hit goalie Connor Hellebuyck and the post before it went in, giving the Predators their third win in the last four games.

"You just try to shoot it, and I think I missed that shot quite a bit but it still went in," Granlund said of his 11th goal of the season. "Sometimes those pucks go in."

Nick Bonino also scored for Nashville (25-20-7), which is 4-2-0 in its past six games. Juuse Saros made 33 saves for the Predators, who were beginning a four-game road trip.

"We're doing a good job boxing out in front of the net, and (Hellebuyck) can see the shots a little more," Jets forward Nikolaj Ehlers said. "We're working our asses off and trying to limit their chances as much as we can."

Both goalies made some tough saves for their teams, who are fighting for a wild card in the NHL Western Conference.

The game was tied 1-1 after the first period and stayed the same after the second.

Shortly after a shot by Jets centre Mark Scheifele hit the crossbar, Appleton scored his third goal of the season by backhanding the puck between the pads of Saros at 2:46 after a feed from Ehlers.

"I think there's a ton of pride in our game defensively," Appleton said. "That's why we've had so many tight games lately.

"When you defend the right way, that's when you should generate more offence and score more goals. But they're tough to come by and they'll start falling for us."

Nashville tied it up with 2:21 left in the first after a Winnipeg turnover in its own end.

Bonino took a pass from Rocco Grimaldi and sent the puck low past Hellebuyck with a one-timer from the left faceoff circle for his 16th goal of the season.

"A lot of these games, especially for (Saros), have gone either way and he's kept us in it and we've ended up losing," Bonino said. "I think for him, he's deserved more wins than he has. And tonight, penalty shot, huge saves on (Patrik) Laine, tracking the puck so well."

Laine got a penalty shot after being slashed by Nashville's Jarred Tinordi, but his backhand shot was turned aside by Saros's blocker with 11:18 left in the middle frame.

Nashville coach John Hynes was asked what he was thinking when Laine lined up for his free shot.

"Not fun. Come on Juuse," Hynes replied with a smile.

The Jets were ahead 25-22 on shots on goal after two periods.

Saros stopped a blast by Laine midway through the third and then moved across the crease to deny a chance by Ehlers. On the other side of the ice, Hellebuyck grabbed a puck in the crease and pulled it in to himself.

"I felt good even though they got the first one early," Saros said. "And then guys sacrificed. We had some big blocks there, they let me see the puck very well, so yeah it felt good."

The Jets had a power play with eight minutes remaining, but a Laine shot hit the top of the netminders' stick.

Saros faced a line of Jets barrelling down on him in the last minute, but he stopped a shot by Blake Wheeler.

Shots on goal were even 34-34 after regulation.

Winnipeg plays in St. Louis on Thursday. Nashville visits Calgary the same night to take on the Flames.

This report by The Canadian Press was first published Feb. 4, 2020.