Grocery competition heats up as new chain arrives in Winnipeg

A new player is set to shake things up in Winnipeg’s grocery store market.

It comes as Statistics Canada reported food prices fell for the first time since January 2000.

Experts said the arrival of a new competitor means the battle for your business is about to heat up even more.

“I think this is going to be good for pricing in the city,” said Winnipeg-based retail analyst Rob Warren.

“Right now, we’re dominated by Sobeys on one side and Loblaws on the other. They’ve kind of staked out their places and they’re just solidifying their prices, but this throws everything into a tizzy.”

Shopper Marcos Villegas usually shops at Costco or Superstore, but likes what Save On Foods on St. James Street has to offer.

“It’s quite nice,” said Villegas. “This store seems like it’s developed into something new.”

He said he’s not sure if the new store is enough to change his family’s shopping routine.

“We’ll have to see if the price is right. Everything’s down to the price. If they have good savings and ways to gather points and stuff like that, I could see myself coming in once or twice. I already saw a couple things that I really like.” 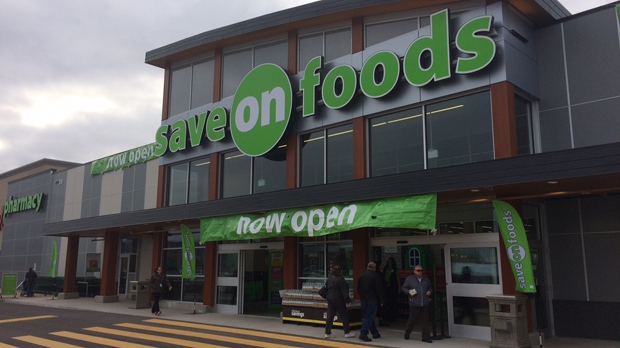 “Food prices are falling for competitive reasons, but also because fuel and all the petroleum-related items have gone down as well, which means your input costs have dropped,” said Warren.

“We’ve had good years for some crops, so that means the commodity prices have gone down. All of that has caused a drop in food prices, not just here in Manitoba, but that’s a North America-wide trait.”

Warren said the opening of Save On Foods is likely to create more competition for people who typically shop at Safeway, Sobeys or Co-Op grocery stores.

“Now they have one more option,” said Warren. “If I’m a manager, I have to think about that.”

The grand opening of three new Save On Foods locations is set for Saturday, but customers got a taste of what to expect from Winnipeg's newest grocery chain during a soft launch on Friday.