WINNIPEG -- A growing number of teachers are unhappy with their jobs and the blame is being put on the Pallister government, according to new numbers from the Manitoba Teachers’ Society.

At the end of Oct. 2019, 801 educators took part in an annual survey, conducted by Viewpoints Research on behalf of the Manitoba Teachers’ Society, to gauge their perceptions of public education in the province. 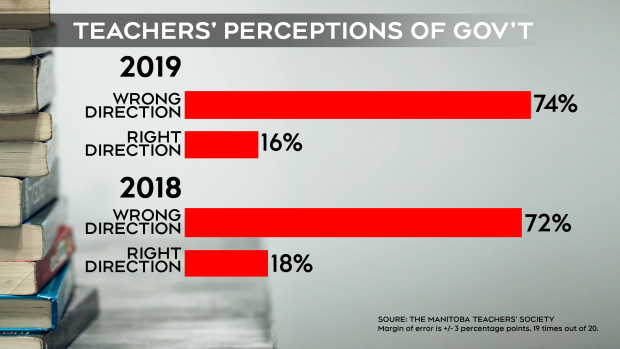 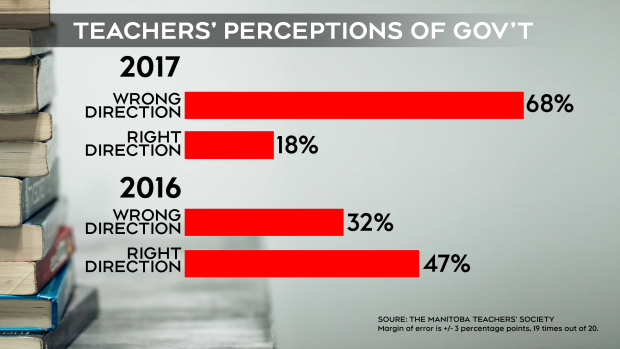 “There isn’t enough money being put into the system to keep working at this level of four years ago,” Bedford said.

Overall job satisfaction has been fairly steady at around 84 per cent.

When breaking down the numbers further, 35 per cent reported being “very satisfied,” which is down from 49 per cent in 2015. Meanwhile, 16 per cent said they are “dissatisfied” -- a number that has doubled since 2015.

The main reason for dissatisfaction was increased workload. 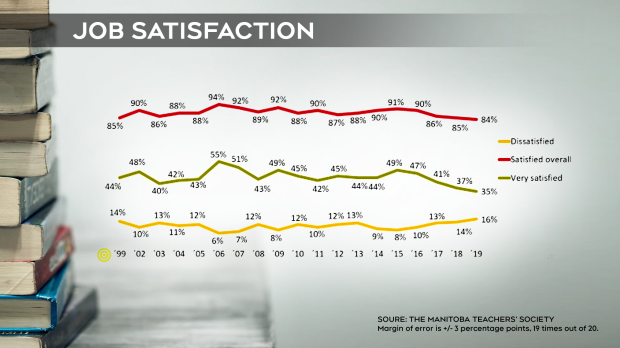 The Manitoba Teachers’ Society was also curious about how many teachers are spending their own money in the classrooms. The poll showed more than half of teachers spent between $200-$500 last year, and about 11 per cent spent more than $1,000. Teachers reported spending the money on things like school supplies, teacher aids, and snacks for kids in need.

Bedford said another concern lies in support for special needs students, who are often supported by educational assistants. He said funding has been frozen in this area for many years, which is putting more on the teachers’ shoulders.

Education Minister Kelvin Goertzen said classroom sizes have not changed significantly over the past three years, and in some cases have declined.

“Funding for students with special needs continues to be provided, and children with exceptional needs are supported with additional funding,” said Goertzen in a statement to CTV News.

The poll also looked at job conditions in the years since the Pallister government has been in power. Sixty-two per cent of teachers said their experience has worsened, which is actually down from 64 per cent in 2018, but up from 51 per cent in 2017.

Goertzen said teachers are a very important part of our education system, and noted all professions have aspects of their jobs that are demanding.

“Teaching continues to be a desired career path, which is supported by the large number of post-secondary education graduates we see in Manitoba every year,” said Goertzen. “This is due in part to Manitoba teachers having the third-highest salaries in Canada, with some teachers earning over $90,000 annually, plus a generous pension plan and other benefits such as extended health coverage and 10 paid non-instructional days.”

Bedford said it’s not about the money.

“Teachers care enormously about the work that they do,” Bedford said. “They hold the future of the province in their hands.”

OPTIMISTIC, BUT HOPING FOR CHANGE

The Portage Teachers’ Association, which falls under the Manitoba Teachers’ Society, said teachers in the region are optimistic.

“They know that changes need to occur to ensure the students are receiving the best quality education that can be afforded and that the teachers are being supported with the proper material,” said Albert Krynski, president of the Portage Teachers’ Association, in a statement to CTV News.

Krynski is also a social studies and geography teacher.

“Teachers do not need to feel that they are under attack, they are doing the best job they can with the resources that they are given,” he said.

Krynski also noted teachers feel they are being expected to do more than just teach. However, he said, they don’t seem unhappy, but are facing more and more challenges.

“Teachers are not dissatisfied, they are having to deal with a lot of issues, demands and concerns before they can even begin to teach a lesson,” Krynski said.

“We have teachers, who are volunteering in breakfast programs to ensure students are getting something to eat, teachers act as mediators to disputes that often originate within the community and manifest at the school level, coaches, volunteers for extra-curricular programs which could not run without a teacher being involved,” he said.

Krynski said they are anxiously awaiting the outcome of the education review.

“There has been a great deal of speculation and rumors about what it may or may not contain, and with the unrest in other provinces teachers are left wondering what may happen.”

Goertzen said the report will be complete soon, and will help ensure Manitoba’s education system focuses on achieving the best results for students.

The Manitoba Teachers’ Society said it is looking forward to seeing the recommendations, and more importantly, whether there will be funding to back them up.