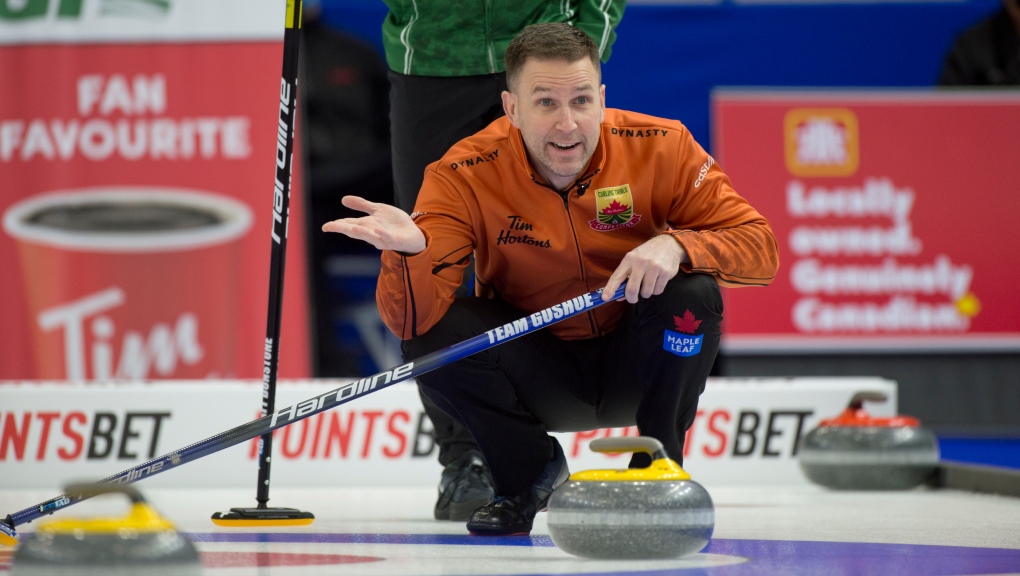 Skip Brad Gushue of St.John's N.L. discusses a shot with his team during draw 10 against team Dunstone at the Tim Hortons Curling Trials in Saskatoon in this Wednesday, November 24, 2021 handout photo. THE CANADIAN PRESS/HO, Michael Burns, Curling Canada
Saskatoon -

Some favourites at Canada's Olympic curling trials are in their expected spot at the top of the round-robin standings. What's more surprising is the star power languishing near the bottom.

At the opposite end of the table are reigning national men's champion Brendan Bottcher and defending trials champion Rachel Homan. They were left clinging to faint hopes of weekend play after hitting the dreaded four-loss mark.

"Once the pressure builds to that must-win situation, you start feeling it," said Team Homan coach Marcel Rocque. "Maybe hanging on a little too tight."

Homan was light on a draw against three in the fifth end that put opposing skip Laura Walker in full control. After the shot, Homan looked despondently up at the rings on the video screen and let out a deep breath, eventually falling 11-5.

"She hasn't felt the draw weight very well," Rocque said. "Not for a lack of effort."

That end likely dashed Homan's hopes of leading her four-player team back to the Winter Games after a forgettable debut in 2018.

"We didn't leave anything on the table," said Homan, who threw a game-low 62 per cent. "We are giving it everything we have every game. You can't win all the games and there's a lot of great teams out here."

Fleury got a good test from Jacqueline Harrison in a 9-6 extra-end victory that kept her in first place at 5-0. Harrison drew the four-foot and forced Fleury to make a challenging hit for the win.

"It's nice for us to be able to pull off a close one, just to feel some nerves out there and come out with a win," Fleury said. "It just gives us a little bit of confidence."

Gushue was also alone at 5-0 after a comfortable 9-4 win over Matt Dunstone. A first-end deuce gave Gushue an early lead and he put the game away with three points in the eighth.

"We're playing good, we're not playing great," Gushue said. "We've been fortunate, I'm not going to lie to you. We've had some misses from skips that we haven't seen that often.

"So there's been a little bit of luck. There's (also) been some timely shots by us."

A men's draw was scheduled for Wednesday night.

Bottcher fell to 1-4 after dropping a 9-7 decision to Kevin Koe (3-1), who's looking to get to Beijing after missing the Olympic podium in 2018.

Brad Jacobs defeated Jason Gunnlaugson 7-5 to sit in second place at 4-1. Mike McEwen edged Tanner Horgan 6-5 in the other morning game and was tied with Koe in third place.

John Epping, who was idle for the morning session, was in fifth place at 2-2. Gunnlaugson and Horgan (both 1-3) were just ahead of Bottcher while Dunstone, the lone Saskatchewan-based entry in the field, remained winless at 0-5.

The top three teams at the end of round-robin play Friday night will advance to the weekend playoffs. A 5-3 record was needed to make the cut at the 2017 trials in Ottawa.

Jennifer Jones was right behind Fleury at 5-1 after an 8-5 win over Kelsey Rocque. Krista McCarville used a single in the 10th end for a 6-5 win over Kerri Einarson that left both teams in a third-place tie at 3-3.

Casey Scheidegger, who had the day off, was 2-3 with Walker and Harrison. Rocque (1-4) joined Homan in last place.

Walker vice Kate Cameron was cleared to play after a COVID-19 PCR test came back negative. She missed Monday's game due to an unspecified illness and the team was off on Tuesday.

"I feel alive today so I'm happy to be here," Cameron said. "Happy to get out of bed and happy to have some energy."

Tiebreakers (if needed) and semifinals will be played Saturday and the finals are scheduled for Sunday. The Beijing Games are set for Feb. 4-20.

This report by The Canadian Press was first published Nov. 24, 2021.