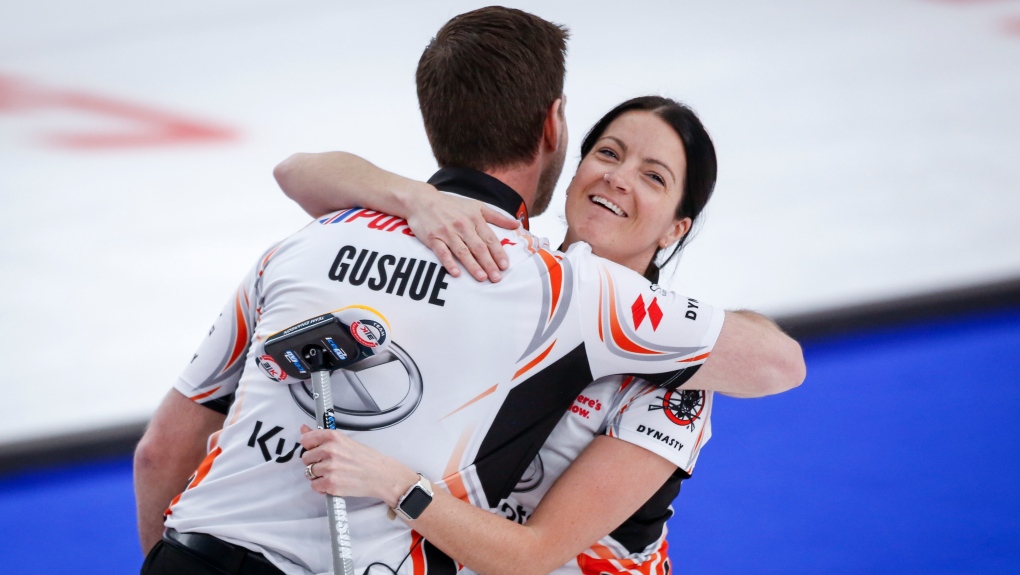 CALGARY -- Brad Gushue and Kerri Einarson advanced to the final of the Canadian mixed doubles curling championship with a 7-6 semifinal win Thursday over John Morris and Danielle Schmiemann.

Einarson made her draw for the win in the semifinal's eighth and final end.

Gushue and Einarson had never played mixed doubles together before this year's national championships in Calgary.

What they have in common is they both skipped teams to Canadian championships in team curling in 2020, but couldn't compete in world championships cancelled because of the COVID-19 pandemic.

Gushue of St. John's N.L., and Einarson of Gimli, Man., have won a combined five Canadian titles between them in team curling.

"We don't have the experience of some of these teams that we're playing in the playoffs have," Gushue said. "We're just kind of relying on our execution.

"Probably making some mistakes as far as strategy and timing. We're flying by the seat of our pants really and making stuff up as we go."

The winner of the final earns $50,000 in prize money and will represent Canada at the world mixed doubles championship May 17-23 in Aberdeen, Scotland.

Thursday's runners-up will collect $30,000, while Morris and Schmiemann pocketed $20,000 for third place.

Morris won gold with Kaitlyn Lawes when mixed doubles made its Olympic debut in Pyeongchang, South Korea in 2018.

He recruited Schmiemann to join him in Calgary when it became clear teammate Rachel Homan would not be able to compete in her advanced state of pregnancy.

Morris of Canmore, Alta., and Schmiemann of Olds, Alta., trailed 6-3 after five ends in the semifinal, but drew even by the seventh.

Gushue and Einarson had last-rock advantage coming home, however, and scored the winning point with it.

"Percentage-wise, that was the best we were played against all week," Morris said.

"They were probably a few more percentage points than us. We have to match them shot for shot and we just quite didn't do that."

This report by The Canadian Press was first published March 25, 2021.