A drug investigation by Winnipeg police has led to four people charged and number of drug seizures.

Police said on Friday officers carried out a search warrant at a house in the Fort Rouge area.

Investigators seized a number of items that included,

Police charged three men and one woman with a number of drug related offences including drug trafficking.

As a result of the items seized police have also issued a public safety advisory in regards to the fentanyl blotters.

Police believe there may be similar blotters around the city. The ones seized had a graphic of a witch riding a broom.

“I can only caution the public that it’s simply too dangerous to touch,” said Const. Rob Carver.

As Halloween approaches police are advising the public to be cautious.

“The concern of course is for families out trick or treating this wouldn’t look dangerous,” said Carver. “It acts incredibly quick and it can result in someone dying within minutes.”

Carver said the drug is potentially lethal and if any members of the public find one of these blotters they should not touch it and immediately call 911.

Catherine Delaquis' family can't wait to dress up and go to door-to-door.

"I feel like they get little tattoo kind of things, because families are trying to get away from the candy, and come up with bubbles and playdough and a tattoo is something you would come across,” she said Saturday.

Delaquis doesn't want to stop her kids from enjoying trick-or-treating on Halloween, but does plan to talk with her kids about the blotters.

"This is just another thing we need to be watching for and taking care of our kids, keeping them safe,” said Delaquis. 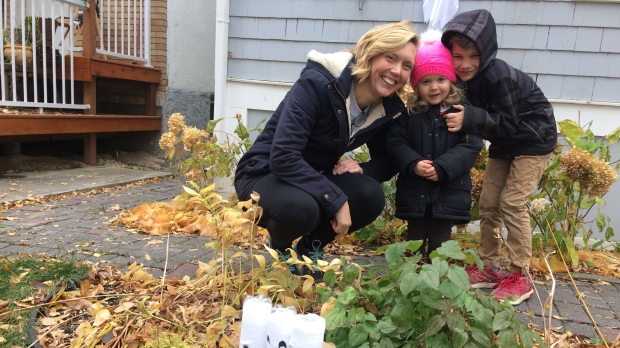