'He didn’t deserve to die': fiancé of SAR Tech killed in training 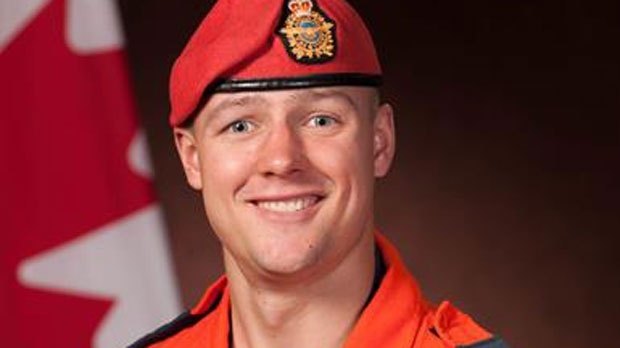 The fiance of a Search and Rescue Technician killed in a training accident last week has issued a statement on the day a ramp ceremony was held in his honour.

Master-Corporal Alfred Barr, 31, died March 8 during a routine jump near Yorkton, Sask. Officials said there was a malfunction associated with Barr’s parachute, but an investigation has been launched to determine the exact cause.

The ceremony was held at 17 Wing Winnipeg on Monday.

Barr’s fiancé Stéphanie Hempel issued a statement on the same day, calling Barr the most amazing man she had ever known.

“He was incredibly kind and thoughtful, someone who always put others before himself,” the statement said. “He was continually encouraging and positive, even in difficult circumstances, and motivated me and others to be hardworking and try different things. He valued his family immensely and also became an integral member of my family.”

Hempel said she and Barr initially started dating long distance, and wrote letters to one another. She said Barr used fine paper, calligraphy pens and sealed the envelopes with wax.

“He simply went all out for us,” Hempel said.

She went on to explain that Barr loved adventures in the Canadian wilderness, cooking and woodworking.

“This feels like such a surreal situation. I keep expecting Alfred to walk through the door,” Hempel’s statement said. “He and I were so happy together. We had plans to travel, to have children, and to grow old in each other's company. We were just setting out on our adventure together. He didn't deserve to die. I miss him terribly, and he will be in my heart forever.”