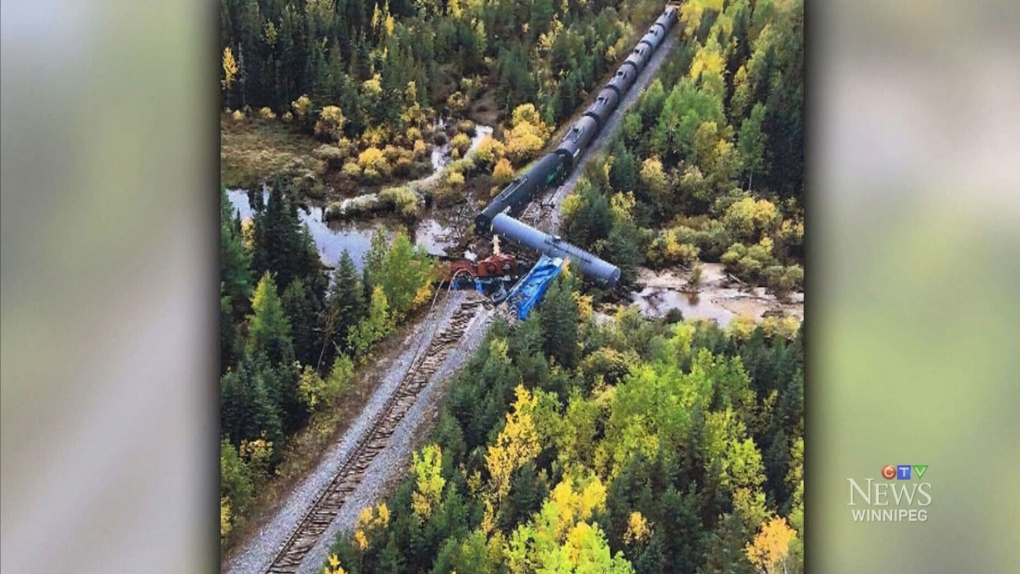 Transportation Safety Board of Canada says the accident occurred near Ponton, Man. on Sept. 15 when the train hit a washout on the Hudson Bay Railway. (Source: Jackie Gogal)

WINNIPEG -- A standing hearing to decide who can participate in an inquest into the death of a train conductor following a derailment in 2018 is scheduled to take place in December.

In February, Manitoba's chief medical examiner called a fatality inquest into the death of Kevin Anderson of The Pas, Man., which occurred in September 2018.

Anderson, 38, was conducting a train that derailed after going over a bridge that had washed out in a remote area of northern Manitoba on Sept. 15, 2018. The province said Anderson and a co-worker were both seriously injured, pinned in the wreckage, and were unable to communicate with the outside world. The pair were found approximately two hours after the derailment by a civilian helicopter that was flying overhead.

The province said RCMP arrived at the scene at approximately 7 p.m. Concerns about leaking fuel from the wreck resulted in a decision to bar access to the site until it could be assessed by trained and equipped personnel.

Emergency crews did not arrive at the site until midnight.

Anderson passed away from his injuries shortly after crews arrived. His body was extricated from the wreckage on Sept. 18. The other person in the crash suffered serious injuries.

A report from the Transportation Safety Board, released in April, said Hudson Bay Railway, the company Anderson was working for, has made changes since the derailment, including updating its security and emergency response plan. It is also requiring crews to check in every hour when operating in "dark territory."

The inquest was called to determine the circumstances into Anderson’s death. It will also review the coordination of a multi-agency response to a serious incident in a remote setting, and examine policies and protocols used by police, paramedics, and other first responders in a potentially dangerous setting.

The inquest will also look to determine if anything can be done to prevent similar deaths from occurring in the future.

The standing hearing will take place Friday, Dec. 18 at The Pas court office. The judge will determine who can participate in the process and question witnesses. Those interested in applying to participate for the inquest can call 204-918-0479.