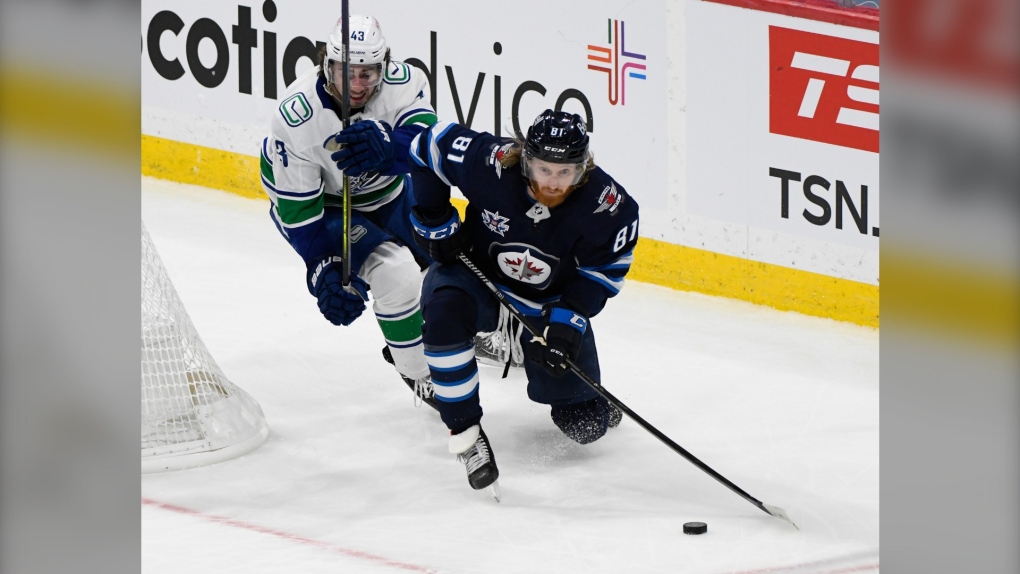 WINNIPEG -- The Vancouver Canucks knew their playoff hopes were faint, but captain Bo Horvat says it still stung Monday night when unlikely dreams of a spot in the post-season were finally extinguished.

"Missing the playoffs, it's never fun," he said. "That's what you play for and that's what you want to do every single year is get to the playoffs because anything can happen. We're going to learn from this experience."

The Canucks topped the Winnipeg Jets 3-1 on Monday but the victory came too late to sway the team's playoff destiny.

Earlier in the evening, the Montreal Canadiens clinched the North Division's fourth and final spot with a 4-3 overtime loss against the Edmonton Oilers.

Vancouver (21-26-3) remains at the bottom of the all-Canadian division with six games left on the schedule. The Jets sit in third and have clinched a playoff spot.

Being out of the race won't change how Vancouver plays its last six games of the season, said goalie Thatcher Demko.

"We want to win. Regardless of the circumstances, it's about pride for our organization, pride for our teammates, coaches, staff," he said. "You're playing for a lot more than what people may think. We're going to try to win every single time we get on the ice, no matter the situation."

The Canucks desire to continue competing was on display Monday night.

Rookie forward Nils Hoglander put Vancouver on the board just over three minutes into the game. He forced Winnipeg's Ville Heinola to turn the puck over at the Canucks blue line and streaked away for a breakaway.

Jets goalie Laurent Brossoit stopped the initial blast but Hoglander picked up the rebound and popped in a backhand shot.

The Swedish left-winger added another strike 10:16 into the third, picking up the puck in a flurry of neutral-zone traffic.

He sprinted into the Jets end and appeared to be sending the puck to Brock Boeser at the front of the net when it bounced in past Brossoit off the arm of Winnipeg defenceman Josh Morrisey to seal the score at 3-1 with his 12th goal of the season.

"I think I played great tonight," Hoglander said. "I had a lot of chances. I think I can score more goals if I score on my opportunities."

Canucks coach Travis Green agreed with the assessment, saying the 20-year-old had a strong game both offensively and in his own zone.

"He's had a good season. He's a good player, he's got a bright future in the NHL and with our organization," Green said. "But there's been some learning curves for him, for sure, which we all expected."

Horvat also scored on Monday, giving the Canucks a two-goal lead 7:21 into the first.

Matthew Highmore sent the puck off the end board and it ricocheted back to Horvat, who riffled a shot in from the top of the crease.

He celebrated with a double fist pump. The goal was his 17th of the season but first since April 18.

Kyle Connor had the lone goal for the Jets (28-23-3). He flicked a shot up and under the crossbar 10:44 into the opening frame, snapping an eight-game point drought.

"Not the result we wanted. It sucks," said Connor, who has 23 goals on the season. "But nice to get one there and try to build some confidence going into the post-season here."

The Jets sniper had plenty of other opportunities, including a breakaway with less than seven minutes left on the clock.

He powered into the Canucks zone and fired a shot at Demko, who made the save but couldn't hold on to the rebound. Connor picked up the puck and unleashed another and this time Demko squeezed it between his pads as he fell over on to his back.

Demko had 39 saves and collected his 14th win of the season. Brossoit stopped 28-of-31 shots.

Winnipeg has struggled through the dregs of the pandemic-condensed season and was coming off a 4-2 loss to the Ottawa Senators on Saturday.

"We generated a whole heck of a lot more. The offensive part of our game looked right until the goalie stopped the puck," he said.

The Jets have now lost nine of their last 10 outings and have just two more games on the regular-season schedule.

The current slump has been difficult to weather, said Winnipeg captain Blake Wheeler.

"When you go through a stretch like we're going through right now, it's very frustrating," he said. "I still think we have a good vibe in our room and a lot to look forward to going forward. But we are certainly having a hard time here closing out the season."

The Jets and Canucks will meet again on Tuesday in Winnipeg. The Jets hold a 5-3 lead in the nine-game season series.

This report by The Canadian Press was first published May 10, 2021.